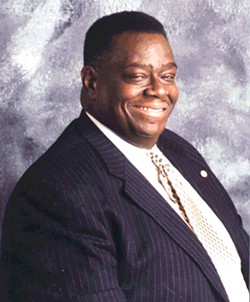 Greater Cleveland Regional Transit Authority (RTA) board chairman George Dixon III has resigned in the midst of an agency investigation into his health insurance. Dixon, who was enrolled in a health insurance program through RTA, may have failed to pay his premiums for years.

The board was made aware of RTA's internal investigation earlier this week. The trustees asked for and received Dixon's resignation Thursday.

Dixon, who owned and operated the Lancer Restaurant for years, was first appointed to the RTA board in 1992 and has been president since 1994. Mayor Frank Jackson will select Dixon's replacement.

Via an RTA statement, Dixon is the only current RTA trustee be enrolled in the healthcare plan. His alleged failure to pay premiums is unrelated to a recent prescription drug scheme that resulted in the dismissals and resignations of 10 RTA employees.

“This comes as a shock to all of us who have known George for so long, and we’re profoundly disappointed,” Welo said. “Failure to pay for your health care would be a serious issue for anyone at RTA – particularly someone in a leadership position.”

The investigation is ongoing, so RTA didn't provide further details. Westlake Mayor and board Vice Chairman Dennis Clough will be leading the investigation. Welo told the Plain Dealer that the board will select new officers soon.