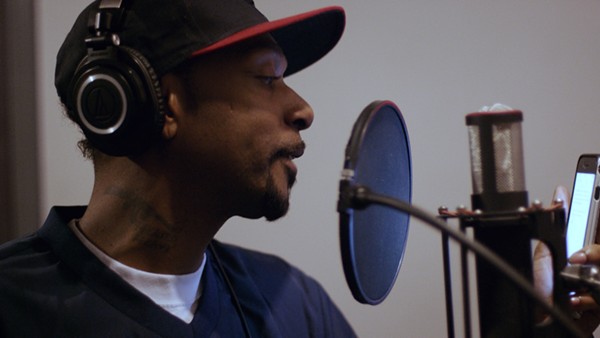 A few years ago, filmmaker Tim Newfang had been working on a documentary sport series when he decided he wanted a change of pace. In a brainstorming session with producer Tanner Beard, he thought it’d be challenging to make a film about a hip-hop group.

“So many music-based documentaries have been made, especially about hip-hop artists like Tupac, Biggie and A Tribe Called Quest,” says Newfang in a recent phone interview. “I told Tanner that Bone Thugs would be a good story. They came from Cleveland out to Los Angeles on a one-way bus ticket and got signed by Eazy-E. I wanted to tell a biographical story about the whole band.”

In 2015, Newfang met Romeo Antonio, a producer who had collaborated with BTNH and toured with them. He and Beard pitched him the concept, and he introduced them to the Bone Thugs guys. Newfang took an unorthodox approach and began to shoot footage without a script.

“We started to film with them as we got to know them,” he says. “While we were fostering a relationship and filming with them, Steve Lobel, who’s their long-time manager, told us that Bizzy and Krayzie were going to do a duet record, New Waves. It would be the first time they collaborated as a duo. We were focusing on the larger biographical piece, but once I found out they were going to make the record together, we pivoted to Krayzie and Bizzy.”

Sons of St. Clair, the resulting documentary, weaves together several story lines as it tells the story of BTNH and of the making of New Waves. The film recently took home the Best Documentary Award at the inaugural Mammoth Film Festival, and it shows at 9 p.m. on Saturday at Tower City Cinemas as part of the Cleveland International Film Festival. Newfang, Krayzie, Bizzy and a few cast members will attend the screening.

In the process of documenting the time Krayzie and Bizzy spent in the studio, the film also delves into the band’s past and includes footage from Cleveland and interviews with local writers such as Daniel Gray-Kontar. Newfang shot some of the footage in Cleveland.

“Cleveland is like a character in the movie,” he says. “It’s evident in their lyrics and in the themes in their records that they have a love and passion for Cleveland. It shaped them as men and artists.”

The filmmakers even happened to be downtown when the Cavs won an NBA title.

“We were shooting all day and came back to the hotel that night, and we were relaxing and enjoying the game,” says Newfang. “With three or four minutes left in the game, we fired up the cameras and ran outside and were able to capture the celebration that poured into the streets. It was amazing. It was just priceless. We couldn’t have been in a better place at a better time.”

Ultimately, Newfang says he hopes anyone who sees the movie understands the artistry of Bone Thugs a little better.

“I would hope people get to see that no matter if you’re getting older or at what stage at life you’re in, that doesn’t mean that you don’t have the ability to still be creative and create at a high level,” he says. “Bizzy and Krayzie prove that with their record. Their priorities have changed, but they’re still on the top of their game when it comes to being MCs, and they’re incredibly talented. I hope that people take that away and can respect that. I also hope it reminds people of the contributions that Bone made to hip-hop. They gifted the world with a unique sound. I hope Clevelanders see it and just feel proud.”