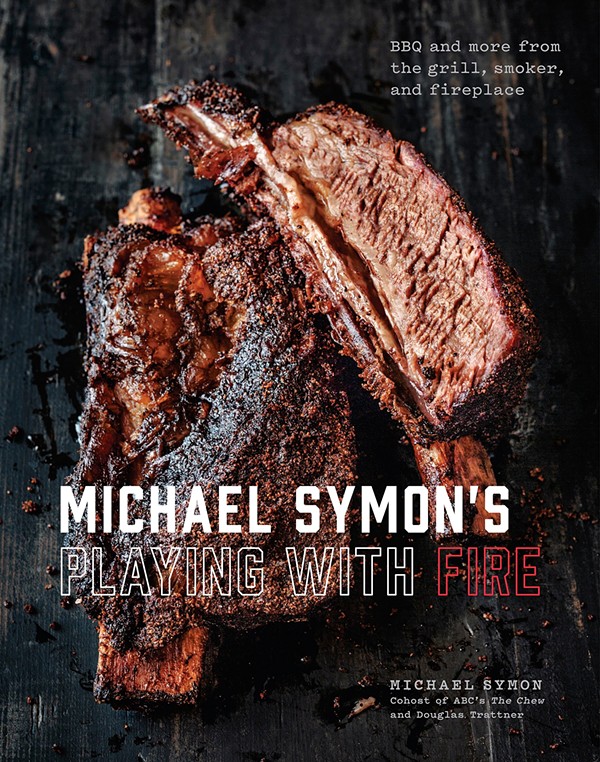 “One of my all-time favorite experiences as a writer took place last summer, when I spent a few days with the food stylists and photographer as they worked alongside Michael Symon to document nearly every recipe in ‘Playing with Fire,’” says Scene dining editor Douglas Trattner. “From whole chickens cooked in a fireplace to Mabel’s beef brisket, every recipe in the book came to delicious life right before my very eyes.”

“Michael Symon's Playing with Fire: BBQ and More from the Grill, Smoker, and Fireplace” is the fourth cookbook that Trattner has co-authored with the James Beard Award-winning chef and co-host of The Chew. Their first two, “Carnivore: 120 Recipes for Meat Lovers” and "5 in 5: 5 Fresh Ingredients + 5 Minutes = 120 Fantastic Dinners," both published by Clarkson Potter, landed on the New York Times Best-Seller list.

Due to be released today, April 3, “Playing with Fire” speaks to Symon’s long love affair with live-fire cooking. The 240-page hardcover book offers 70 different recipes for the grill, smoker and indoor fireplace. A handy guide explains the pros and cons of various grills, smokers and pits, while recipes for various sauces, sides and rubs cover various barbecue styles and regions.

Symon is the chef and owner of more than 18 restaurants, including Lola and Mabel’s BBQ in downtown Cleveland, B-Spot Burgers throughout the Midwest, Roast in Detroit, and Angeline at Borgata Hotel Casino & Spa in Atlantic City. Come fall, he'll open a second Mabel's BBQ in Las Vegas.

“My favorite elements of the book are the pitmaster profiles, interviews with the top names in American barbecue,” Trattner says. “In place of Symon explaining the differences in regional barbecue in terms of meats, rubs and cooking methods, we asked pros like Kent Black, Amy Mills, Rodney Scott, Sam Jones, Patrick Martin and Billy Durney to weigh in themselves.”

Trattner, by the way, is currently working on the third edition of "Moon Handbooks: Cleveland," a comprehensive travel guidebook published by Avalon Travel.