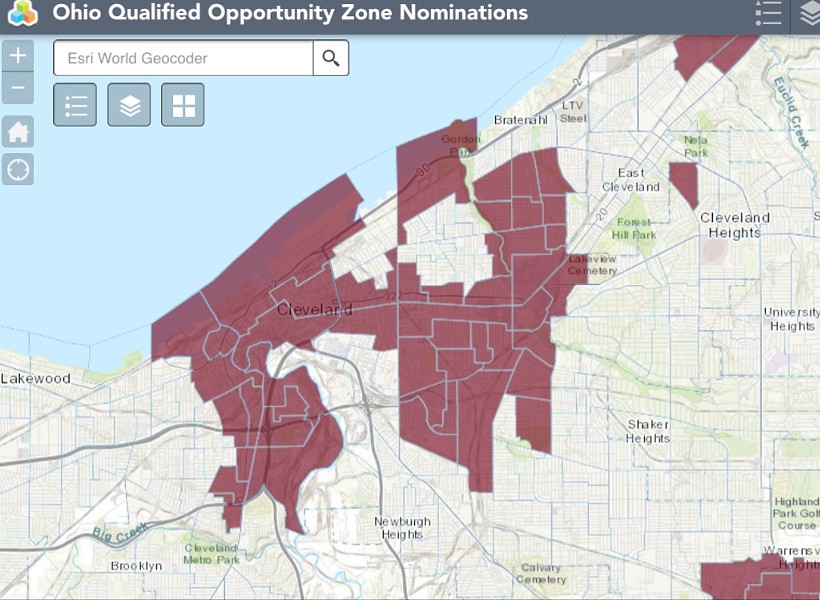 Cleveland Mayor Frank Jackson signed off on a list of census tracts submitted to the state of Ohio for a new economic development incentive that aims to stimulate private investment in "low-income, high-poverty" areas.

The local tracts selected for the new "Opportunity Zone" designation, first reported by Crain's Cleveland Business, were submitted by the Greater Cleveland Partnership in conjunction with the Fund for our Economic Future and Team NEO, the same regional business organizations keeping an airtight seal on the failed Amazon HQ2 bid, and the "trade secrets" therein.

In a press release last month, GCP (Cleveland's chamber of commerce) announced that it had submitted a "joint prioritization list" of its selections to the state, having "worked closely with" the City of Cleveland, Cuyahoga County, and other partners to identify potential census tracts.

But the tracts selected by the state for the Opportunity Zone designation — which, again, is meant to target distressed areas for new investment — scan like a map of Cleveland's hottest neighborhoods. The map (screenshot above) includes all of downtown, the eastern portion of Ohio City, including Hingetown and the W. 25th Street corridor, and Tremont. On the east side, the selected tracts encompass University Circle and points north, the Opportunity Corridor and the so-called Health Tech Corridor.

In a March 2 letter to Gov. John Kasich, obtained via public records request and included below, Mayor Jackson said that his staff had focused on "edge neighborhoods," as identified in a study that he commissioned from the CSU Center for Population Dynamics, "to help target investments in areas that are strategically positioned for growth."

"At my direction, City of Cleveland staff has identified areas of opportunity where there will be significant returns both to investors and the community," Jackson wrote Kasich.

Jackson announced the first phase of that initiative last week, a mixed-use development project on E. 105th Street and Ashbury Avenue. The development team on the project will consist of the Finch Group, Ozanne Construction and City Architecture. Wesley Finch and Dominic Ozanne are both major campaign contributors. Finch has been among the most lavish and consistent donors to the Council Leadership Fund, and Dominic Ozanne was among three business leaders to organize a controversial fundraiser for Frank Jackson in Gates Mills last year.

In addition to the census tracts ultimately selected by the state, the city's nominations included three tracts on the west side "Lorain Corridor," three additional tracts in North Collinwood, and three tracts in the Industrial Valley. Tracts in Hough, East Glenville, Slavic Village, Old Brooklyn and Detroit-Shoreway were given secondary prioritization.

"There needs to be an intentional approach that ensures community benefit and increases the market confidence by the investor that a return is likely," the maps stated. "The Mayor's Neighborhood Transformation Initiative is predicated on the premise of improving market confidence in inherently disadvantaged neighborhoods."

Cleveland City Council had no idea tracts were being nominated and shipped to the state. Some councilpeople were miffed by Kasich's selections — both because the tracts weren't representative of the region's actual economic distress and, of course, because they weren't consulted on the nominations.

Hey Gov. @JohnKasich you whiffed on your selections of opportunity zones for the @CityofCleveland
Can you tell me who you worked with on these selections?
I'd like to take you on a tour of some of our most impoverished neighborhoods. https://t.co/IjpxnkyXKS


When Scene spoke with Zone by phone, he said he thought the "concept and intent" of the Opportunity Zone program were both good, and reflective of sentiment in Washington that the Community Development Block Grant program had to be more targeted. Zone said that he feared with presumed future reductions to CDBG dollars, Cleveland would lose the ability to invest in its poorest communities.

But he said the OZ program could be a complimentary investment tool. He described it in laymen's terms.

"For every $100 invested in an Opportunity Zone, $7.50 would be tax exempt," he said. "That's the margin a developer needs to make a profit. So that's the encouragement to the private sector. That's a good program in theory, but the application is key."

Zone said he felt that the nomination process was rushed and that important conversations that could have happened in City Council committee hearings never happened.  He said conversations only "began in earnest" at the tail end of February, less a month before the nominations were due on March 21. (Jackson's letter to Kasich was dated March 2, so there would have been plenty of time for council suggestions and amendments.)

"There was not one hearing, not one presentation by the administration," Zone said. "As far as I know, there was no hearing at County Council either." (County Executive Armond Budish made the recommendations for census tracts in Cuyahoga County outside the City of Cleveland; Jackson and his team nominated tracts within the city limits.)

Zone said it was clear GCP lead the regional effort, both at the county and city level, and that as a result, the region's healthiest neighborhoods, "neighborhoods that are rapidly gentrifying," are the ones being targeted for investment.

"I believe that by targeting these areas, with the business community driving the train, that this is all about private sector development," Zone said. "It's not about building equitable and inclusive communities."

Anthony Brancatelli, who chairs city council's Development, Planning and Sustainability committee, confirmed that council had had no input.

"GCP has been in front of my committee before for a number of legislative actions," Brancatelli told Scene. "They never reached out to us for our input on this. I agree, the maps produced do not reflect economically distressed areas."

The City of Cleveland's Economic Development Director of nine years, Tracey Nichols, told Scene that while she did not consult for the city of Cleveland, she did submit information to the state on behalf of other clients, whom she did not name.

She did not seem to share Councilman Zone's concern that the Opportunity Zone program was more about private-sector development than "low-income, high-poverty neighborhoods."

"I think [the program] was designed to give developers a big enough incentive to invest in these neighborhoods," she said in a voice message. "And I think that Cleveland is well-positioned to receive a lot of investment. First of all, we have a lot of developers already investing in some of these neighborhoods, and second of all, compared to other cities across the country, we had our downtown included, which is really great in some ways. In other ways, it was based on a census that was almost ten years ago, when we had lower incomes there, but we're lucky they used that census."

Nichols said she agreed there were neighborhoods left out in the state's selections — she cited Lakewood by name — but was otherwise optimistic.

"Cleveland is in a unique position to have developers really want to make investments, and I think all our neighborhoods will benefit as long as there's potential in the market, with an additional boost, to make a project work. I think it's exciting."

A spokesman for the Ohio Development Services Agency has not yet responded to questions regarding the state's selection process.
See related PDF JacksontoKasich_OpportunityZones.pdf