It's Thursday, April 5, the first full day of the 42nd Cleveland International Film Festival, so rustle up your slateboard clappers, local cinephiles, and allow us to intone "ACTION" in the tenor of your favorite director.

Individual days are sponsored at CIFF, and we're delighted to report, apropos of nothing, that today is "brought to you by" our beloved Greater Cleveland Regional Transit Authority (RTA).

Last night's opening night screening of The Drummer and the Keeper at the Connor Palace was by all (that is to say, all social media) accounts a success. We must now get down to the business of seeing as many movies as possible.

Here are Scene's recs for April 5: 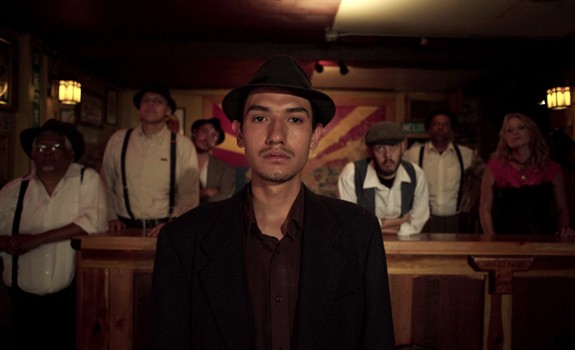 Bisbee '17
Scene's music editor, Jeff Niesel, hails from Arizona and raves about the eccentric former copper-mining town of Bisbee, Arizona, which happens to be in spitting distance from the Mexican border, and also the subject of this acclaimed documentary from director Robert Greene. On the 100th anniversary of "the infamous Bisbee Deportation of 1917," Bisbee residents restage portions of the tragedy, in which 1,200 striking miners were violently taken from their homes, banished to the middle of the desert, and left to die.

"Townspeople confront this violent, misunderstood past by staging dramatic recreations of the escalating strike. These dramatized scenes are based on subjective versions of the story and “directed.” In a sense, this formula calls to mind Joshua Oppenheimer's 2012 documentary The Act of Killing, which restaged massacres in the Philippines in the killers' favorite film styles.

Bisbee '17 deals with political issues — immigration, unionization, environmental damage, and corporate corruption — that are as resonant today as they were 100 years ago. It screens at 6:20 p.m., with an additional screening tomorrow (4/6) at 2:30 p.m.

Brewmaster
Cleveland's a brew town — haven't you heard? — so presumably, there are an awful lot of you who are really into craft beer and microbreweries and all that jazz. This is a documentary about the things you love, about beer's quote unquote "magnificent qualities"—the tastes, the aromas, the way it trickles down your throat on a hot summer day.

"From home brewers who use their stoves to some of the biggest names in the business, this documentary is a behind-the-scenes look at how some of our favorite beers began. The film follows aspiring brewmasters, too, such as a NYC law clerk looking to fulfill his dream of turning pro and a beer educator studying to be one of just a dozen Master Cicerones in the world."

Hochelaga, Land of Souls
Attention, Academy Awards buffs. Hochelaga was the Canadian entry in the Foreign Language category, but didn't make the final cut. This one looks like an instant CIFF classic, so get your ticket for tonight's screening pronto, because tomorrow's is already on standby.

It's set in Montreal, North America's most European city. During a football game at Molson Stadium, a player is killed when a portion of the field collapses. Mohawk archeologist Baptiste Asigny is brought in to excavate the sinkhole and finds evidence suggesting that it may be a site of great historic importance, indeed, the site of the "lost village of Hochelaga," where First Peoples were massacred centuries before.

"As the digging proceeds, a haunting tale is unearthed, one that links the fates of many peoples and many nations. The beautiful storytelling moves backward and forward across the centuries. Families and cultures intricately weave through the generations to create a stunning tapestry of chance and destiny. The more Baptiste uncovers his story, the more we find he is uncovering ours as well."

Manry at Sea - In the Wake of a Dream
Local angle alert! In 1965 Cleveland suburbanite and Plain Dealer copy editor Robert Manry set out to accomplish a lifelong dream of sailing across the Atlantic Ocean. Middle-aged and married with children, Manry thought his life had become stale.

This "riveting documentary," from director Steve Wystrach, includes rare archival footage and captures Manry's journey and the global media sensation it became. (We'd advise reading local independent journalist Roldo Bartimole on how The Plain Dealer dropped the ball on telling the story of its own employee.)