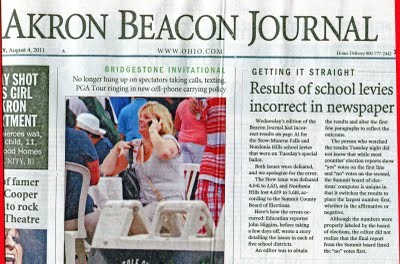 The Akron Beacon Journal has been sold to Gatehouse Media, the largest publisher of daily newspapers in the United States and the owner of the Columbus Dispatch, the Canton Repository and a preponderance of smaller-town dailies.

The ABJ's current owner, Black Press Ltd., is a Canadian company with papers in Alberta, British Columbia, California, Hawaii and Washington state. Its president and CEO said that while Black Press was proud of the ABJ's work over the past 11 years, it was located too far from the company's other publications. Black Press was unable, he said, to provide "the kind of leadership the paper needs and community deserves."

Gatehouse, a holding company for the New Media Investment Group, naturally is already gushing about the advertising possibilities as they commandeer the state's eyeballs.

The Plain Dealer / Cleveland.com are of course still owned by the New Jersey-based Advance Publications, but the Gatehouse incursion is advancing ever northward: Gatehouse now owns The Independent in Massillon, the Times-Reporter in New Philadelphia, and the former Dix Communications pubs, which include more than 30 daily and weekly newspapers, of which the dailies are the Record-Courier in Kent, The Daily Record in Wooster, The Ashland Times-Gazette, The Alliance Review, and The Daily Jeffersonian in Cambridge.

GateHouse Media is headquartered in suburban Rochester, N.Y., and has become the largest publisher of daily newspapers in the U.S., with more than 650 publications, including 145 dailies, in 38 states. It probably goes without saying, but the Akron Beacon Journal sale includes the paper's affiliated website, Ohio.com.