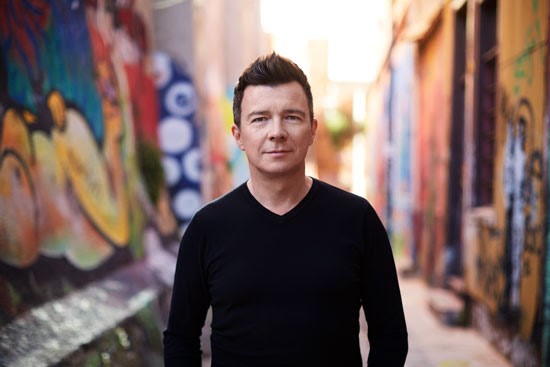 In 1993, Rick Astley landed a U.S. Top 40 hit called "Hopelessly." The soulful adult contemporary ballad peaked at No. 28 on the Billboard Hot 100, and spent a total of 20 weeks on the charts. But instead of the song serving as the start of a new chapter, it became an ending: Disenchanted with the music industry, Astley stepped away from the spotlight and all but retired from music.

He eventually released a new single in 2001 but didn't return to the stage until the mid-2000s—a decision he says came about thanks to the urging of his family.

"I used to get offers to come to different places and sing my old songs, and my stock answer was, 'Look, I just don't do that anymore, thanks," Astley says, calling from his home in England. He performs at 8 p.m. on Sunday, April 22, at House of Blues. "'Thanks for remembering me, but I don't really do it.' Then, we—I say we, the royal we, family we—we got an offer to go to Japan. And my wife was, like, straightaway, 'That's happening. We're going.' And our daughter—we've got one child, our daughter, Emilie—she said, 'We're going. That's happening.'

"That was kind of, sort of, how I got into singing the old songs again, to be honest," he continues. "It's hard to explain, really…It wasn't like I was negative about it. I just felt it was a different time in my life. It felt a bit weird to go back and do it. But I also think that the fact that we went on a family holiday [made it] a very different experience. It wasn't like I was just going to do gigs and I had to put that jacket on again and be that guy again. It was like, 'We're on a family holiday. I'm going to do, like, really big karaoke for a few nights.'"

Astley laughs, something he does often during the half-hour interview. He's in a good mood, likely in no small part because he says he's just returned from the pub after having a pint with a friend. But the musician is also clearly enjoying life, and the second chance he's getting to be in the musical spotlight—on his own terms. "There isn't the pressure that there used to be," Astley says. "It doesn't feel the same anymore. It feels a lot more comfortable, to be honest."

Stakes were much higher when the Lancashire, England, native emerged in the latter half of the '80s. A charismatic protégé of the gleaming production powerhouse Stock Aitken Waterman, he was a soul/R&B-pop phenomenon with a velvet-trimmed voice—resonant and pure—fond of wearing snappy blazers. His 1987 debut, Whenever You Need Somebody, spawned three U.S. hits—including two chart-toppers, the glamorous dance-pop baubles "Never Gonna Give You Up" and "Together Forever"—while 1988's Hold Me in Your Arms launched two Top 40 hits. (Incidentally, he also had a Top 10 Billboard hit in 1991 with "Cry For Help.")

Astley says it was "very, very daunting" coming to America for the first time when he was breaking big. The sheer size of the country was intimidating—as was the fact that so many of his favorite artists hailed from here. Pressure from the powers-that-be also didn't help.

These days, Astley is more content to follow his muse in more personal directions. In 2016, he released 50, a record hewing toward contemporary-meets-classic soul, pop and R&B. The album, which he wrote, performed and produced himself, landed at No. 1 on the U.K. charts. But despite such commercial success, Astley is realistic about where his career stands in music's current landscape.

"If we do gigs here [in the U.K.], I might end up playing to 10,000 people," he says. "Don't get me wrong—that, in its own way, is where every artist wants to be. You want to be playing in an arena, and it'll all be amazing, and fireworks, and all the rest of it. But the truth of the matter is, you've just got to be realistic about where you are in your career at any moment, and where you are in any territory.

"To me, America is still like me putting a toe in the water. No one's got a clue, I don't think, that I made a record," he continues, and laughs. "And that's fine. It really is. It's okay. It's kind of how it was all those years ago, to be honest, where, like I said, I had all these hits around the world in different places. I'd have, like, three or four Top 10—if not No. 1, records, blah, blah—in the U.K. Came to America and everyone's like, 'Who are you? We don't really care. Get to the back of the line.'"

Astley is also savvy about the pitfalls of stardom, including the fact that when musicians start generating money for other people, they're often treated "like a commodity," as he puts it. In hindsight, he looks back at his own pop fame and realizes how lucky he was to step away from his career and emerge relatively unscathed.

"I had a bit of money, so I've been comfortable and everything, and also I have my sanity," he says. "I never got into drink and drugs and all of that and everything. I had good people around me who cared about me. But that's not a normal story, I don't think. And I think that a lot of the time, people are kind of pushed through a funnel just to kind of make the maximum amount of cash that can possibly be made."

He laughs. "You have to have somebody who really cares about you around you to make sure that you get through that. Because that's just the way the nature of the business is. It's a very here-today-gone-tomorrow kind of business, isn't it?"

Astley does admit that "the internet's changed everything," namely that if fans want to hunt down his music, it's much easier now. (The "Rickrolling" phenomenon that brought "Never Gonna Give You Up" back into the public eye also helped.) But Astley is now able to tour all over the world, and visit countries he never did back in the '80s and early '90s. "Back [then], it was about videos," he explains. "It was about the radio. It was about the CD. It was about promotion. [For certain artists] it wasn't so much about playing live—certainly not pop artists. You could have a big hit album and never even go there.

"I'm doing the absolute opposite of that," he says. "I'm not having big-hit albums, but I'm playing in places a lot more now. It's nice."

In fact, Astley is rather surprised that he's now making a living from touring.

"It's bizarre and weird, to be honest," he says. "When I quit in my late twenties, I thought I was letting the door close, to a great degree. I thought, 'Well, I won't be getting on the stage ever again. That's not going to happen.' I just didn't think that would ever happen. But live music now is stronger than it's ever been."

Astley has a follow-up to 50 nearly done—he says they're working in final mixes at the moment, and it is going to be released this year—and recently released a new song, the majestic soul-pop "Walk Like A Panther," from the movie of the same name. And he's still determined to enjoy his concert tours like little vacations. For example, Astley fondly recalls a visit to NASA when he swung through Texas a few years ago, and he (of course) has the Rock & Roll Hall of Fame on his Cleveland wishlist.

"I think that's the thing—I've never really fallen out of love with music," he says. "I know at one point I just fell out of love with the business side of the music thing, because like I was saying earlier, you become a bit of a commodity. I wouldn't swap places with anybody. I'm really glad of what happened—and grateful for what happened."