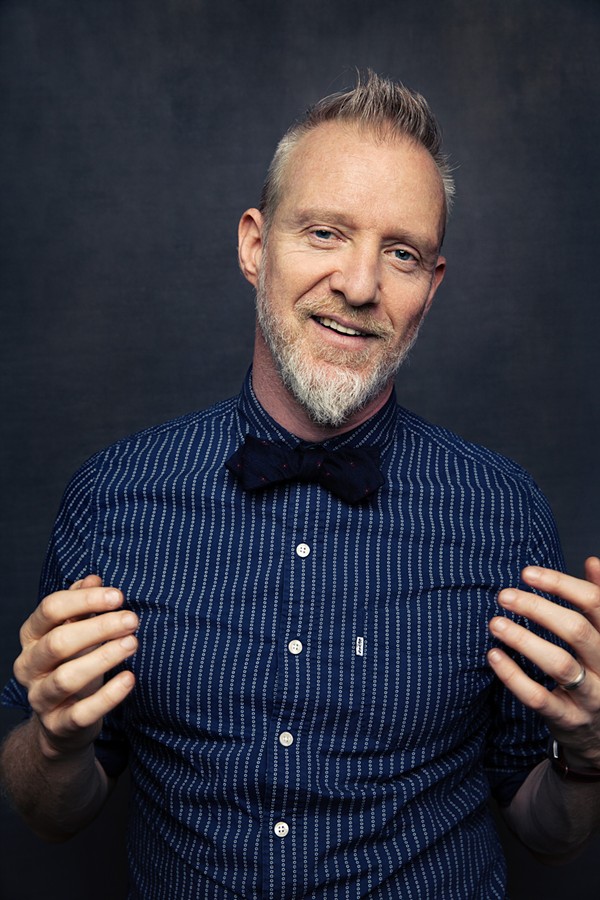 Chris Barron, the scraggly, wiry longtime frontman of the Spin Doctors is headed to Cleveland armed with only his songs and an acoustic guitar — and he’s the first to admit that might sound pretty weird.

“You know, if I saw the guy from the Spin Doctors was coming to town and just playing a solo acoustic set, I wouldn’t really know what to expect,” he says with a laugh during a phone conversation in advance of the Beachland Tavern show that takes place at 8 p.m. on Thursday, April 19. “I imagine there’d be some guy in a silly hat singing a bunch of silly tunes.”

While he doesn’t reveal whether or not he’ll be wearing the aforementioned silly hat — he does promise that the staple Spin Doctors hits “Little Miss Can’t Be Wrong” and “Two Princes” will be present and accounted for in the setlist, alongside some deeper cuts from the band’s catalog. He’ll also be sharing a hefty sampling of material from Angels and One-Armed Jugglers, his latest solo album which was released last fall.

For those who have followed Barron throughout his career, he’s been playing acoustic shows for many years, going back to his early days in New York City in the late ‘80s when he would play acoustically at the Nightingale Bar, mixing blues, country and folk covers with future Spin Doctors originals. The acoustic nature of the current tour is a throwback of sorts to the spirit of that time, while also offering a look behind the curtain at Barron’s life’s work from a different angle.

“If you’re interested in the Spin Doctors, and you’re interested in me as a figure in the Spin Doctors, my solo shows are pretty insightful because it can kind of take you back to some of the original impetus of a lot of these tunes, because I’m the principal songwriter,” he explains. “You can see my approach and how some of these songs that you know well originally sounded before the band. So if you’re one of those kooky people who likes to look under rocks artistically, there’s some archaeological interests in the show as well.”

Whether you’re a casual fan or a hardcore devotee, Barron promises an experience that will satisfy; he says you’re going to get your money’s worth and then some.

His new album has a diversely introspective thread that runs throughout, alternating between songs like “April and May” and “Saving Grace,” which are more upbeat in tone, at least on the surface, and “Till The Cows Come Home,” which finds Barron delivering an old school croon of a vocal against a waltz-y musical bed. “Too Young to Fade,” which closes out the record, is one of the oldest songs on the album, with the seeds of the track first developing nearly 20 years ago after Blues Traveler bassist Bobby Sheehan passed away in 1999 at the age of 31.

Barron began working on writing the song as a tribute to his old friend at that time but found that he had to step back because of his emotions. “It took me a really long time to get back to that tune,” he says now. “You know, I had it in my back pocket for a really long time. But I was just too sad to finish it when I wrote it.”

“The World Accordion to Garp” does indeed feature accordion, and Barron is really happy with some of the more subtle moments that found their way into the songs on this album.

“I think in terms of writing that tune, I got really lucky with that lyric. It just expresses a lot to me, about show business and a lifetime of living among the guitars and the microphones and the amplifiers and the backstages,” he says. “The second verse is ‘The tuba has been drinking/ The evening has been torn/Too late to get an inkling when the sheep have all been shorn.’ With ‘the tuba has been drinking,’ the tuba player does this little run in the background that it’s like, ‘Yes!’ There’s so much wonderful musical interpretation on this record.”

Working with a cast of first-call New York musicians, including Saturday Night Live drummer Shawn Pelton, on the songs that came together to form the album, Barron was delighted with the results that emerged from them taking the time to get inside his songs, adding their own flavor as individuals.

“I hear the playing that these guys came in and did on my tunes. I can hear how much thought they put into their parts and the raw interpretation of the song, which is just really fucking cool,” he says. “You know, when people come in and you’re like, ‘Oh my God, yes, of course!’ Because I come at it like a writer, but a drummer comes at it like a drummer. When Shawn comes at it, he’s the house drummer for SNL, so when he brings all of that skill and interpretation into it as well as just his ability to hold down a groove, it’s just great.”

As Barron recalls now, Cleveland was one of the early markets that latched onto the music that he was making with the Spin Doctors in the early '90s. He mentions Joe Carroll, a longtime promotions veteran who was working for Epic Records, the band’s label.

“Joe was one of the first guys. We were going around the country and we would meet up with people from the label and they were all enthusiastic. They were all really nice and very cool. But Joe was the first one who was like, ‘You guys have some serious traction here in Cleveland and people really like you guys.’ He really liked us. So I just remember Joe being one of the first people who we ran into out of town that wasn’t tempering our expectations. It wasn’t like, ‘Oh yeah, you know, you guys are obviously a great band, but not everybody gets it. I mean, I get it, I think you guys are great.’ He was the first one who was like, ‘You guys really have something going on.’”

“It was a very tough record to work at the time but belief and persistence paid off,” Carroll recalls in a separate interview. “I remember the first time they came to Cleveland. I can’t recall the bar they played but it was in a basement. There were three people there, plus myself and my branch manager Rich Kudolla. They played like the place was packed. It was very impressive and is still one of my favorite stories.”

The eventual success of “Two Princes,” Barron says, “seems in hindsight like a fate accompli,” but at the time they sent it out looking for initial airplay, that wasn’t the case.

“When we first released it, radio was just like, ‘What the fuck is this?’ And they didn’t get it at all. It wasn’t just a rock and roll tune, it wasn’t an R&B tune,” Barron says. “You know, I was wearing secondhand sweaters with my thumb sticking out of the sleeve and they were just like, ‘What the fuck is going on with this band?’ They really didn’t know what to do with us. What ended up happening was we put out ‘Little Miss Can’t Be Wrong,’ which had a bit more of a rock 'n' roll kind of touchstone reference that radio could wrap its head around. That tune blew up and we released ‘Two Princes,’ and it ended up being the tune that everybody knows so well.

“You’re lucky to be known for something in this business,” he tells us as we’re talking about the ups and downs of his lengthy career. For Barron, even if that's only a couple of songs for those who are less familiar, it’s all good.

“[Some] people mostly know me for ‘Two Princes’ and ‘Little Miss Can’t Be Wrong’ and I’m grateful for that,” he says. “I’m not the kind of guy who’s going to show up at a solo gig and be like ‘I’m only playing my solo material.’ I love playing my hit tunes. You know, those tunes are huge. How many people get to play a tune that they wrote and have people go nuts? I don’t have to play ‘Freebird’ in my show, because I can play ‘Two Princes’ and play a tune that I wrote. The people who take the time to check out my new record, they’ll see that there’s this guy who embraces where he comes from but also has developed over time, and there’s more to me than ‘Little Miss Can’t Be Wrong’ and ‘Two Princes.’”