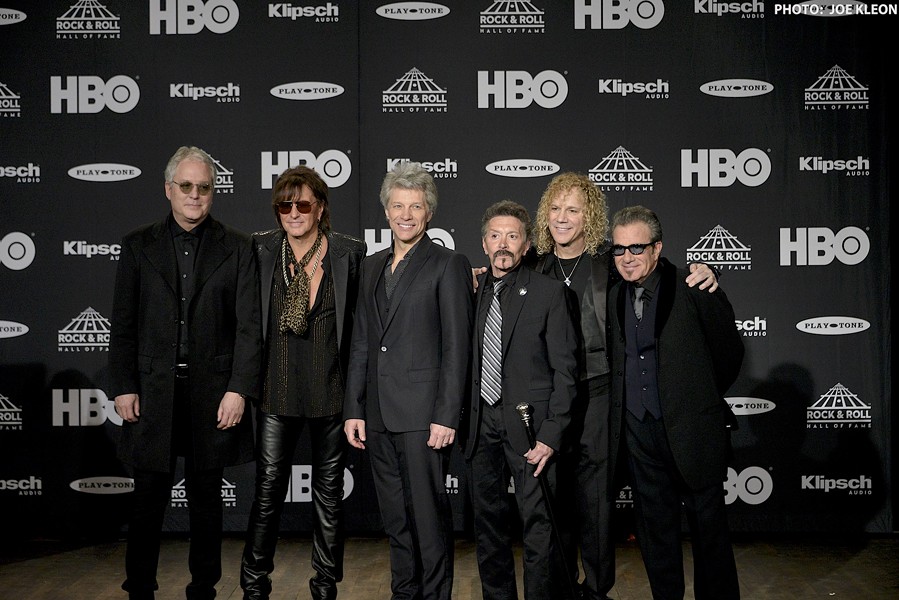 The 33rd annual Rock & Roll Hall of Fame Inductions that took place last night at Public Hall stretched on for over four hours. Bon Jovi, one of the six acts getting inducted, dominated the ceremony, making it so that the event appealed more to the band’s fans than to the fans of the other acts being inducted (Dire Straits, for example, who received very little stage time).

Shock jock Howard Stern did the honors for Bon Jovi. He peppered his remarks with his typically lewd comments about threesomes and other sexual acts while acknowledging that “hell must have frozen over” because he left his home to come to Cleveland, something he has complained vociferously about ever since he found out the Inductions were taking place this year in Cleveland and not New York.

He proceeded to trash Rolling Stone magazine publisher Jann Wenner, whom he said worked behind-the-scenes to ensure Bon Jovi wouldn’t be inducted into the Rock Hall. “That magazine is now a pamphlet,” he said disparagingly, adding that he read an entire issue while hanging out backstage.

At the end of his rant, he admitted that the guys in Bon Jovi were “the nicest men,” and he sang a few lines of “Dead or Alive” before adding, “These boys have worked their asses off.” Each member of the band then said a few words of thanks before handing the microphone over to singer Jon Bon Jovi who recounted the band’s history in great detail and acknowledged the influence of Bruce Springsteen and Southside Johnny. "To all of you who have been a part of this ride for the last 35 years, and all the fans, we share this honor with you – because this life is a gift," Bon Jovi said.

Performing for the first time in years with original guitarist Richie Sambora, the band played hits such as "Livin’ on a Prayer,” ”You Give Love a Bad Name” and “It’s My Life.”

After Bon Jovi took up the first hour of the four-plus hour long event, three members of Dire Straits unceremoniously inducted themselves. Without any sort of presenter, they humbly accepted their award and apologized for the absence of frontman Mark Knopfler, whom bassist John Illsley said couldn’t attend because of “personal reasons.” The band didn’t perform after accepting the award during a very awkward moment.

After taped testimonials from the likes of Johnny Cash, Little Richard, Aretha Franklin and Jerry Lee Lewis, Alabama Shakes singer Brittany Howard inducted guitarist Sister Rosetta Tharpe, calling her “the godmother of rock ’n’ roll.” Howard sang a Tharpe track with backing from Questlove of the Roots on drums and Felicia Collins from The Late Show with David Letterman band on guitar. The dreadlocked Collins took over lead vocals to turn in a rousing rendition of Tharpe’s “Strange Things Happening Every Day.”

Decked out in a black and white checkered jacket, a very enthusiastic Brandon Flowers talked about discovering the Cars while growing up in a small town in Utah. “They turned my black and white town into color,” he said before kneeling to hand the band their award as they walked to the stage.

The Boston band has a serious Cleveland connection — late bassist Benjamin Orr hailed from Northeast Ohio. Cars members all acknowledged his contribution to the group, and singer Ric Ocasek even spoke about living in Cleveland for a short time, something which received an enthusiastic response from the capacity crowd at Public Hall. “It’s quite strange to be here without him,” Ocasek said in reference to Orr. The band’s performance included flawless rendition of hits such as “My Best Friend’s Girl,” “You Might Think,” “Moving in Stereo” and “Just What I Needed.”

During an In Memoriam tribute, old photos of deceased rock 'n’ rollers showed as part of a video treatment, and Heart singer Ann Wilson and Alice in Chains guitarist Jerry Cantrell performed a rendition of the Soundgarden song “Black Hole Sun” as a tribute to Soundgarden Chris Cornell, a close friend of Wilson’s who passed away last year. (Also, as a way of honoring the late Tom Petty, the Killers had opened the show by playing a couple of Petty tunes).

As a way of acknowledging influential acts who haven’t been inducted into the Rock Hall (and probably won’t ever be inducted), guitarist Steven Van Zandt gave awards to six singles, including Chubby Checker’s “The Twist” and Link Wray’s “Rumble.” Van Zandt endeared himself to the crowd as he gave shoutouts to the Agora, DJ Kid Leo and locally based concert promoters the Belkins.

Soul singer Mary J. Blige then gave a somber speech as she inducted singer Nina Simone. She described Simone as “bold, feisty, strong and fearless,” something Simone’s brother confirmed in a rambling speech he made while accepting her award. A tribute to Simone included singers Lauryn Hill and Andra Day with backing from the Roots. Day sang Simone's "I Wish I Knew How It Would Feel to Be Free" and Screamin’ Jay Hawkins’ “I Put a Spell on You,” which Simone famously covered. Wearing a billowing dress that made her look like a fairytale princess, Hill capably sang and rapped her way through Simone's tracks "Ne Me Quitte Pas," "Black Is the Color of My True Love's Hair" and "Feeling Good." Though she regularly adjusted her ear monitors and sometimes appeared frustrated with the sound mix, Hill never faltered during her soulful performance.

The Moody Blues brought the epic evening to a close. Band members thanked fans as they accepted their award after a speech from Ann Wilson, who praised their “natural intelligence.” They closed the evening with performances of some of their biggest hits, including "Nights in White Satin."