'The Sax Man' Maurice Reedus Jr. Has Passed Away 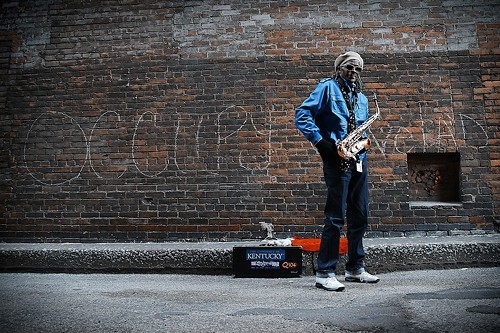 Cavaliers and Indians games just got a lot less joyful.

Cleveland's seminal street musician, saxophone player Maurice Reedus Jr., has passed away. Commonly seen around Prospect Avenue before and after events, Reedus Jr. was also the subject of Joe Siebert's 2013 documentary, The Sax Man. He was 65.

"He loved going downtown," his sister Andrea Reedus-Pride told WKYC. "If he was sick, he'd go downtown. He loved the people. Literally the city of Cleveland probably have all of my phone numbers. Everyone who ever took a picture with him, they probably sent it to me."

Before becoming a staple of Cleveland's Gateway District, Maurice was a member of the Motown band Sly, Slick & Wicked. After Reedus received two tickets from police for playing without a license or a permit in 2013, City Councilman Joe Cimperman pushed for legislation in favor of Reedus. That July, the Cleveland City Council passed the Street Performers Ordinance, also known as the Sax Man Legislation, which explicitly allows "acting, singing, playing musical instruments, pantomime, juggling, magic, dancing, reciting and clowning" on Cleveland streets for monetary compensation.

Days later, Reedus played a reunion concert with his former band at the Cleveland House of Blues, where Cimperman presented him with the legislation.

The Sax Man had spent a few months in the hospital last year and recently had some heart issues, but he was out and performing two weeks ago at the Tribe home opener. He was found dead in the bed of his new apartment by family members on Monday.

Whether playing The Flintstones theme song or for sold-out crowds with his band in the 1970s, Reedus was an iconic fixture of Cleveland's downtown nightlife and will sorely be missed. Many fans and friends have already told his family as much in calls and texts.

"We appreciate that 100%," his sister Sharon Reedus-Sanders said. "That's kind of keeping us above water right now."

Reedus had no savings or life insurance, so the family has started a GoFundMe to raise money for his funeral. You can contribute here.