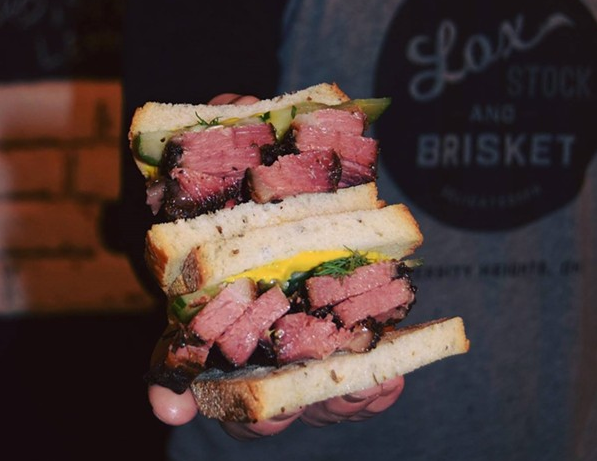 If you haven’t yet heard of chef Anthony Zappola, just wait. The Cleveland native has held top spots at some of the nation’s finest restaurants, most recently Tom Colicchio’s Heritage Steak at the Mirage Hotel in Las Vegas, where he worked as executive chef. It was there that he caught the attention of the local food media and was awarded Best New Chef by Las Vegas Weekly.

After a decade and a half with Craft Restaurants, working in New York, Dallas, Los Angeles, and Vegas, Zappola launched the Rice Shop, a popular Asian-fusion concept that took root in a former Chinese takeout shop. Last year, the chef decided to sell that concept and return home to Northeast Ohio to open his latest venture: Lox, Stock and Brisket.

Lox, Stock and Brisket (13892 Cedar Rd., 216-471-8175) opened quietly this week in the former Ribsticks spot in University Heights. The chef was attracted to the space because of its smoker, in much the same way he was drawn to a former Chinese carryout because of its well-seasoned wok. The star product exiting that smoker is beef brisket, which is treated almost like pastrami thanks to a brine-rub-smoke process.

Zappola’s twist on the Jewish deli features a straightforward menu of soups, sandwiches and sides that are inspired by the neighborhood around it. There’s matzo ball soup, a lox platter with house pickles, and a roster of tantalizing sandwiches built around brisket, smoked turkey, lox, tuna salad and a breaded chicken schnitzel.

The Rueben on rye is packed with brisket, kraut, swiss and Russian dressing. The Lincoln Park is a chicken schnitzel sandwich with pickle slaw and hot sauce aioli, and the Larry David combines brisket and turkey with cheese, onions, slaw, kraut, lettuce, tomato and pretty much everything else in the restaurant.

Items like brisket, turkey, lox and tuna salad are also available by the pound.

Zappola says that he hoped to get his feet underneath him during a “soft opening period,” but he forgot how quickly word spreads on Cleveland’s east side.

“I wanted to do a soft opening so I can get the recipes down and ease into this,” he says. “But I already sold out on the first day. The place is cool, it’s small and already it’s getting a lot of attention.”


Sign up for Scene's weekly newsletters to get the latest on the news, things to do and places to eat delivered right to your inbox.