'Avengers: Infinity War' is Every Bit the Bantery Epic Spectacle You're Expecting 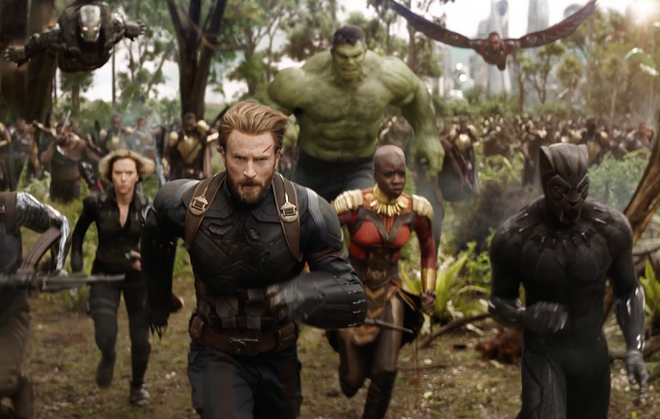 With so many story lines and so many characters crammed together on screen for this two-hour-and-forty-minute romp, Avengers: Infinity War (Part 1) has no choice but to explode with nonstop action and snappy dialogue from start to finish.

It's a testament to the screenwriters (and hometown-hero directors Anthony and Joe Russo) that they've assembled this unwieldy final product, which opens area wide Thursday evening, with — astonishingly — a good deal of narrative coherence and an entirely new roster of villains; led by Thanos, the WWE-muscled, lilac-tinted, scrotum-chinned alien voiced by Josh Brolin.

Like other maniacal villains, Thanos claims to have certain motives for the genocide that he intends to inflict upon the universe. But he's a fearsome superboss, with the smarts of Tony Stark, the mystic capabilities of Dr. Strange and the brute strength of the Incredible Hulk, a strength he happily demonstrates in an early scene.

As he hunts down the six sacred Infinity Stones over the course of the film, only the scattered Avengers — including the ragtag Guardians of the Galaxy, the full Wakandan military, Spider-Man and more, plus the usual suspects — might be able to summon the collective firepower to challenge him.

(Thanos, oddly enough, has more screen time than any character in Infinity War, though that's much more a function of the ensemble's enormous size than anything else.)

The marquee action sequences, including three climactic events staged concurrently, succeed both in their conceptual framework and their visual style. In the Marvel Cinematic Universe, the Russo Brothers remain at the pinnacle for staging combat, particularly of the hand-to-hand variety. The humor is also ever-present, with our heroes delivering punchline after punchline in scenes designed to serve up memorable moments and laughs, relying on audiences' familiarity with previous films to achieve emotional resonance and depth. The third-act revelations are unlikely to produce anything more than dizziness for new audiences (of which are there are admittedly few.)

The Russos' Captain America films (Winter Soldier and Civil War) have been earth-based, and in Infinity War the scenes on earth, including a majestic Wakandan battle, are visually much more appealing than those in outer space. The competing artistic styles and scenic terrains, cobbled together from at least eight prior MCU films and multiple visual effects studios, makes jumping around the universe especially jarring here. (The visual effects crews named in the closing credits would seem to substantially outnumber several Ohio counties.)

But the Russos' affection for Captain America shines through. Chris Evans is lushly bearded as Steve Rogers, and his crew — older now, and wiser — gets the better half of the action in this first installment. As aliens descend upon Wakanda, Cap and T'challa lead the charge (see photo above), and the camera captures them sprinting at maximum speed toward their adversaries. It's an honest-to-goodness rush!