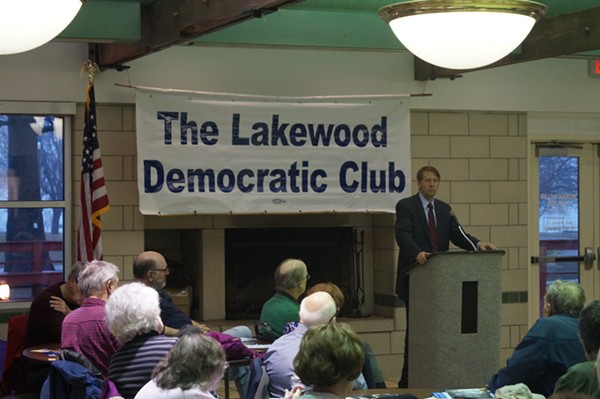 “If we’re going to be able to do the things we need to do to serve the people we represent, we need representation in Columbus that will help us do that,” said Mayor Jackson. “That’s why I support Rich Cordray for Governor and Betty Sutton for Lt. Governor.”

Budish chimed in to say that Cordray "understands the needs of the people of Cuyahoga County and the state of Ohio and he knows how to get things done. In Cuyahoga County we’ve done great things on early childhood education, in fighting the opioid crisis, and in workforce training, but we can’t do it alone, we need help from the state. Rich gets it and will be there for us.”

In response, Cordray's main challenger (and Plain Dealer endorsed Democrat), Dennis Kucinich issued a statement saying that Cordray "can't stand on his own," and reminded city officials of Cordray's efforts to overturn Cleveland's assault weapons ban, among other issues that Kucinich identified as failures of Cordray's tenure as Ohio Attorney General.

“I’m confident the people of Greater Cleveland will support me, regardless of the actions and motivations of certain local elected officials," Kucinich said. "Their endorsement was obviously driven by Democratic Party insiders, among them City Council President Kevin Kelley, who is also executive vice chairman of the Cuyahoga County Democratic Party.”

"Conventional wisdom is the recipe for the status quo," Elkins said, in a press statement from the Schiavoni campaign. "As mayors, we can no longer afford the status quo as our schools starve, infrastructure fails, and residents lack quality employment opportunities. We are supporting Senator Joe Schiavoni because he has done what no other candidate in the race for Ohio governor has done: he has outlined an array of sensible, practical, and achievable programs to restore opportunity for all of Ohio's citizens."

For Cordray, the endorsement of city leaders is surely welcome, but likely less important than another endorsement he received yesterday, from the Service Employees International Union, District 1199.

"Richard Cordray has a proven record of standing up for working people in the great buckeye state,” said Becky Williams, President of SEIU District 1199, in a statement Monday. “As Attorney General, Richard Cordray fought for Ohio's home care providers, demanding they be paid overtime and receive all other benefits afforded to employees. He worked with SEIU members and business leaders to help guide the former Forum Health hospital system through bankruptcy and helped save more than 1000 good-paying, middle-class jobs with benefits in the Mahoning Valley.”

The primary election is May 8.