In the parking lot of the former Giant Eagle on Buckeye and E. 116th, members of the Service Employees International Union Local 1, Clevelanders for Public Transit and other area groups celebrated the historic and ongoing importance of organized labor to commemorate May Day. Speakers highlighted the need for transportation equity, food justice and even local journalism during the sunny and upbeat event.

Emceed by Gail Sparks, 2017 candidate for Cleveland City Council (who promptly assured Scene that she was already back on the stump), the rally was intentionally located in a neighborhood ravaged by disinvestment.

"This neighborhood is a desert," said Sandra Ellington, an SEIU speaker and Buckeye resident who delivered remarks about the power of organized labor and the upgrade in the quality of her own life after she secured a union job as a janitor at Hopkins International Airport.

"I believe in a union," Ellington said. "You can take care of your family. It lifts your head up. You can be proud of your work. I want everybody to have the same pride and to know that they can have a decent wage. But I haven't forgotten about those non-union members still looking for a decent wage. We can't be all about self. We have to be about everybody else, because if I'm up, I'm going to lift everybody up with me. That's what a union is."

Plain Dealer reporter Ginger Christ appeared on behalf of the local news guild and said that with drastic newsroom cuts, reporters were increasingly unable to tell the stories that had to be told in neighborhoods like Buckeye.

Chris Stocking, of Clevelanders for Public Transit, stressed the need for transportation equity in forgotten neighborhoods where the majority of residents don't have cars. Like other speakers, he spoke out against economic systems that create winners and losers in our communities.

Kai Kyles, holding a Black Lives Matter sign, spoke passionately about food as a human right and invited those gathered to consider the vast systems of labor required to produce the food that consumers buy.

"If we don't make the right choices with our forks and our money, we'll continue to see divestment," she said. "And if we wait for corporations, we'll never get fed. Food is power. Let's feed ourselves."

"The city is making a statement," said Sandra Ellington. "If we can pay it, you can pay it too." 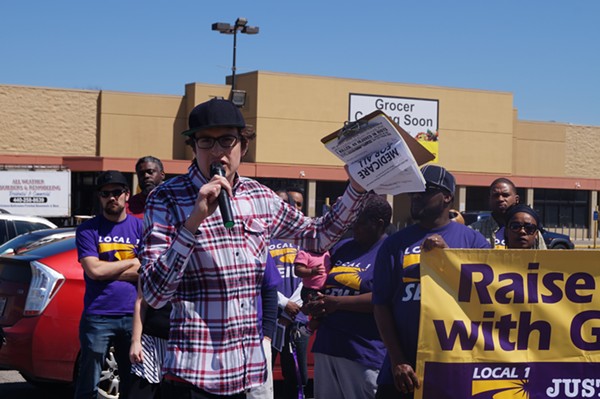