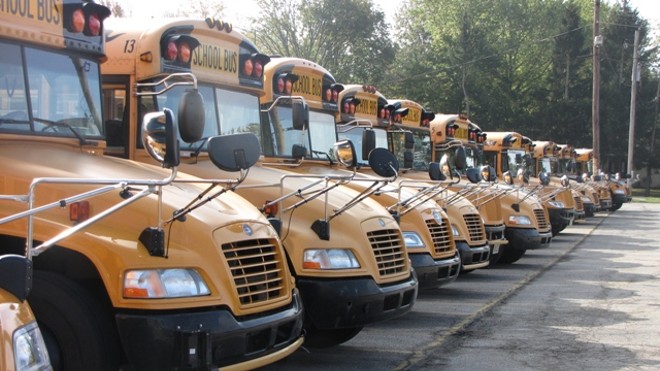 Every school day at the Acomb household begins with a chaotic morning.

Mike and Lindsay have four children - ages 6, 8, 10 and 12 - who need to catch multiple buses every morning to different schools in the Aurora City School District. That means Mike and Lindsay have to make sure all four children are dressed, fed breakfast and put on their buses before the parents can dash off to work in Solon and Kent, respectively.

"If I didn't have busing," Lindsay says as she pours cereal for 6-year-old Brynlee, "it just wouldn't work."

"The State of Ohio continues to push the burden on school funding from the state level, partially, to the local taxpayers," says Aurora superintendent Pat Ciccantelli.

"Eventually we'll have to look at more local revenues to offset these kinds of losses."

Stephen Dyer, an education policy fellow at Innovation Ohio, sees the state's cuts as just one part of an ongoing problem.

Governor John Kasich requested the cuts in his budget proposal last year. The cuts went untouched as the budget passed both chambers and was eventually signed by Kasich in July.

"The only reason to do this is to free up some money so they can make a tax cut," Dyer claims, seeing no policy-based reason for cutting school district transportation.

Kasich saw the cuts as necessary, however, telling the Ohio House of Representatives before proposing his budget, "It is going to be tough. We are on the verge of recession in our state."

Dyer, who used to represent Portage County in the Ohio House is disappointed by the lawmakers he used to work with.

Ciccantelli agrees. "I'd love to see us tweak the system and make it a little bit fairer, going back to the level of state support we had even just five and eight years ago."

On a broader scale, Dyer sees these cuts as a slippery slope to even tighter financial situations for Ohio school districts and families, predicting districts will try to make up the lost funds with tax levies.

"Are we going to have to go to the ballot so that we can raise a new levy and raise people's property taxes to pay for that gap, or are kids just going to have to do without?" Dyer asks. "Those are really horrible decisions for school districts to make."

When asked in 2017 how districts should make up the funding lost in his budget, Kasich replied, "Why don't they put a levy on? Because if they put a levy on, guess how much of the money goes into the schools? 100 percent."

"I'm angry about it because I have to continuously tax myself to get my kids what they need," he says.

"It's kind of scary," she says. "It's almost like a punishment for being a working parent. They're punishing us because we want to work and have jobs."

Luckily for the Acombs, Aurora can handle the transportation cut by dipping into its general fund ... for now. Ciccantelli says the district's transportation offerings will not change once the cuts come through, but other things that Aurora's general fund might have paid for may go away.

"We'll look at what it is we'll have to cut," Ciccantelli says of his "already lean" district. "The litmus test we'll use is if it impacts kids significantly, we won't cut it."