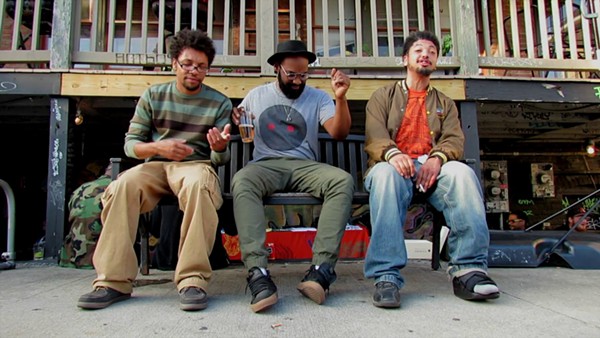 MuAmin Collective has been a fixture on the local hip-hop scene in the city for over ten years. During that time, the crew has seen a few different lineups — some featured local poet and musician R.a. Washington and local musician Dwayne "G.O.R.K." Pigee, who was killed in February 2016, but the two constants have always been emcee Josiah "Zion" Quarles and producer Aaron "A-Live" Snorton. The group will release its latest album, The Hues Brothers, on May 15, and this time around it's even more of a family affair.

"This one was a collaborative effort between myself and my brother [James 'Jungle Jim' Quarles] as far as lyrically," says the elder Quarles via telephone. MuAmin Collective plays a release party at 9 p.m. on Friday, May 11, at Now That's Class. Obnox,  Kent Archie and DJ Nuera open the show. "The idea of brotherhood was floating around. We're both big movie buffs and fans of the Hughes Brothers' work. Also back in the day, me and [Snorton] had this painting and landscaping thing, not like a real business, but we did about ten jobs or so, and we were calling ourselves the Hues Brothers, so it's kinda like it resurfaced. It was really early in the project, but it kept floating and as stuff was coming together it kinda felt cinematic. So we started digging though [movies like] Menace II Society and The Book of Eli and Dead Presidents and pulling different pieces that fit thematically. As that was happening, my brother had gone ahead and put together this compilation of characters and moments from these different movies in one piece. He's a phenomenal artist."

One of the album's songs, "Fake News," touches on a term that's becoming part of our daily lexicon, but the brothers address it in a different manner.

"My whole thing is that it's not new," Quarles says. "The shit has been going on for a long, long time. A lot of people are perturbed by what's happening, but if you look at the past history, this shit has happened over and over again. That's how we came at it, not so much for the shock value of Trumpism and all that."

Electic guitar licks and screaming horn samples along with some inspiration from the Dirty South serve to amplify the track's head nod factor.

"The beat was just fire and stirred up something," Quarles says. "I've had that verse for awhile, I actually wrote it before the election during the campaign. Then, my brother penned a verse, and I'm like, 'This is definitely a song now.' I wanted a hook that was kinda sing-y, but not too much, something like Goodie Mob's first album [1995's Soul Food]."

As a whole, the bulk of MuAmin's production is handled by A-Live, but the guys do occasionally work with others as well, especially if the end result is a different sound.

"We've got one producer who did 'Lovin' You.' He's worked with my brother previously on a project, that's Geo," Quarles says. "His stuff is crazy and a bit more electronic sounding. It's a spaced out song."

The group's last project was a live album, Dig, which was released by Bullshit Night Records in 2016.

"We brought in some of the cats we've been working with when we have the band," Quarles says. "So Jake Wynne did lay some horns as well as [David] Klasper. He plays a variety of instruments but mostly he plays the saxophone. We recorded out at his place. He built this home studio, and it's crazy the way he laid it out. It's above this historic house in Lakewood. He was the groundskeeper there, but he set up a studio."

MuAmin has slowly been building what they do live into the production process.

"Eli Hanley wrote the bass line on this track 'Show and Prove' a long time ago, and it had been sitting around," Quarles says. "Ahp from Poetic Republic did a hook and a verse on it, and I thought it was fire. He's doing his thing out in California; he goes by Prime Minister now. Eli also laid some keys on this one track, 'I Saw the Light,' and he just played over the whole beat. I sat down with A and found a couple good takes and chopped those up."

Quarles speaks highly of the openers for the Now That's Class release party.

"[Obnox and Kent Archi] are really dope," Quarles says. "We wanted to keep it fam but also have something else other than just us as well. Kent brings crazy energy. His shit is dope, and Obnox is a legend. There's not too much you can say about him that already hasn't been said."

The Collective is happy to see their contemporaries thriving, but they aren't resting on their laurels either. They plan to stay busy in the coming months and are already back in the lab creating new music.

"We've got some stuff lined up for the summer," Quarles says. "We're doing Waterloo Arts Fest, and we're doing a hit-up at Coda. That'll be our first time playing there. There's also the Kool Keith show, when he comes here with his Dr. Octagon tour. We're looking to keep pushing. Cleveland's got so much stuff going on...Sam [from Fresh Produce] just dropped her shit, Mourning A BLKstar is blowing up, it's good to keep the scene solid. I'm happy to have some new physical product to push out, and we're already recording for the future, so it don't stop, but it feels good to put this one to bed and give it to the people."