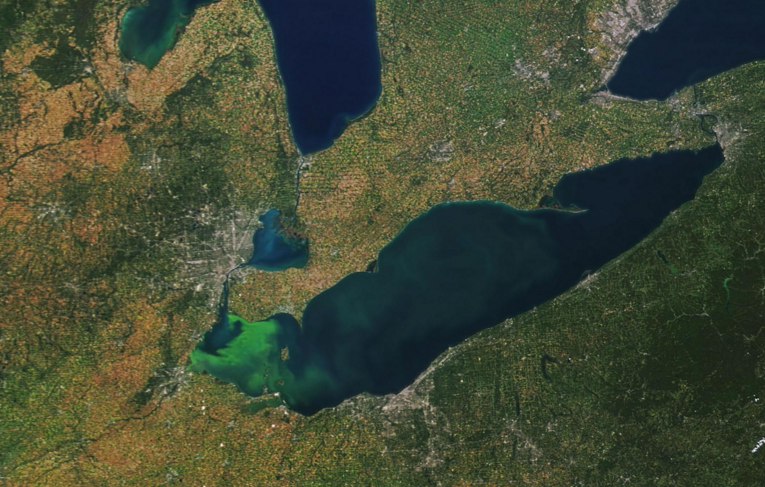 Toxic algae blooms affecting the western basin of Lake Erie stem from farm runoff but their severity and frequency are likely exacerbated by climate change, scientists have warned. A report this week from the Environmental Working Group cataloged 300 large blooms nationwide since only 2010, and the real number is probably higher.

That news comes after a study released in March by scientists and researchers from the University of Minnesota, the Minnesota Sea Grant and the EPA that found an increase in blooms tied directly to increased greenhouse gas emissions. In general, lakes and reservoirs produce about one-fifth of the greenhouse emissions as fossil fuels.

So, basically, algae blooms will be more frequent and worse because of climate change, and they will then increasingly contribute to that climate change.

"We found that, as the lakes go greener, more eutrophic, the atmospheric effect of the lakes skyrockets," said John Downing, the director of the Minnesota Sea Grant. "That's because plants are decomposing and shooting methane and CO2 into the atmosphere. Basically a little increase could cause the greenhouse effect of lakes to increase 5 to 40 percent."

A lot of their research is centered on Lake Erie, the shallowest of the Great Lakes, and where we've seen some of the nastiest blooms in recent memory.

"The atmospheric impact of those gases coming out of Lake Erie right now is probably 18 times the atmospheric effects of all the cars in the city of Detroit," Downing said.

The state of Ohio recently, and finally, declared Lake Erie impaired, which will likely mean stricter regulations for farmers in an effort to stem the tide of runoff. John Kasich, for his part, has upset some environmentalists this past week after saying that Lake Erie wasn't, in fact, impaired, before circling back to say that he meant only parts of it were impaired, not the whole thing.

“There are parts that we’ve declared impaired in the western basin. But in the middle of the lake, we don’t think so," he said. "And I’m not going to go around and say that all of Lake Erie is impaired.”

Toledo would probably beg to differ, as that city has endured multiple large-scale blooms leading to health advisories in recent years.

"Toledoans are paying for a problem we didn't create," Toledo mayor Wade Kapszukiewicz said at a recent conference, indicating that the Ohio Farm Bureau Federation held far too much sway with Ohio lawmakers who should be clamping down on them instead of cashing their checks. "It's probably the most powerful interest group in Ohio."