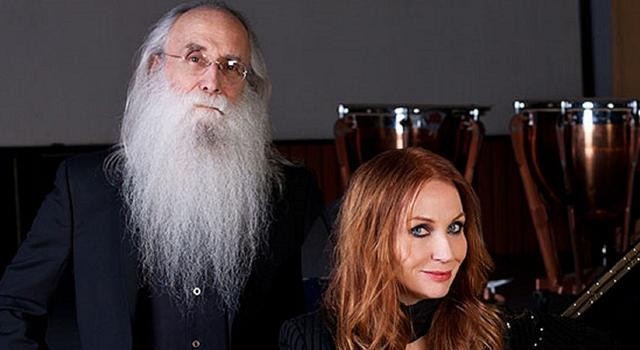 When she performed at the State Theatre last year with headliner Bryan Ferry, singer-songwriter Judith Owen immediately endeared herself by greeting the crowd with a “Hello Cleveland” as she began to play a 30-minute set of Norah Jones-like mellow jazz/pop tunes. As she explained, she had every right to use the phrase since her husband, Harry Shearer, plays a character in Spinal Tap, the cult classic that spawned the expression.

Owen returns to town to perform at 7 p.m. on Wednesday, May 23, at Nighttown. In a recent phone interview from a Washington D.C. tour stop, she spoke about each track on her new album, redisCOVERed.

“I said to my husband, ‘What do you think is the most extreme thing I could do for this album? What is the most opposite to my style? What would be a blistering shock?’ He didn’t even pause for a nanosecond and said, ‘Drake’s “Hotline Bling.”’ I studied the lyrics long and hard. The melody is one thing, but you can’t change the lyrics. What I do is I edit them, so they make sense to me and my life. Half the song, I couldn’t use because some of the things weren’t my life. I am not Drake. What I did relate to was this experience where I was so love in someone and they weren’t that into me, so every waking moment was watching the phone and waiting for him to call. He was also a bit of torturer who would bring other women to my gigs. It’s a true song about one side of love.”

“It’s a throwback to Ray Charles and the Ronettes and the songs from the ‘50s and ‘60s, the songs that will live forever for everyone. They’re so full of abandonment and joy that they’re fantastic. I wanted to do a few songs that contemporary. I don’t want to just look back at songs from the past and think of them as being classics. I wanted to re-imagine songs in our vision now and are around us all the time. I couldn’t see how it can be me. It was and I remember that feeling of dancing with someone and being alive and on fire but that’s not what spoke to me about the song. It wasn’t until I got to the end and there’s a throwaway line about putting on Van Morrison and following his lead. That’s everything that we Brits love.”

“I’m a huge Chris Cornell fan. I am someone who has struggled with depression my whole life. I’m finally managing it. I remember hearing this and thinking it’s the greatest musical approximation of depression because it sounds like you’re wading through molasses and you’re numb and drowning. The video with the melting faces was fucking great too. It speaks to me so deeply. I wanted to show my experience of hiding in plain sight and how depressed people get through life by having an entertaining face, so people don’t see who you are inside. And then you go home and collapse from exhaustion because it’s hard to keep that up. That was my life for so many years.”

“I just found out from one of the writers of ‘Hot Stuff’ that he loves this version. That means so much to me. I have the upmost respect for these songs. When I think sexy and how to get the most sensual sound from the piano and voice, I go to Brazil and Jobim and bossa nova. It’s just sex on a stick. I had to take this immediately to Brazil. I sing it with much more of a feeling loneliness and a need for company.”

“I’m a huge Joni Mitchell fan. She opened the door for all of us. She is the reason we look to her as the patron saint of female singer-songwriters. I came to her late in the day. This song stunned me because of the words and what she was talking about. Finally, people are talking about this properly and it’s out in the open, and there she was nailing it. She goes opposite in sound to what the lyrics say and that’s make it so exquisite. Because I think she’s one of the greatest poets ever, I wanted to focus on the lyrics. I wanted that far-way cinematic feel and that’s why I brought in Nicholas Payton on trumpet. It has that desperate far away sound on it. I love hearing it and playing it. I’m very proud of it. It didn’t need anything in the first place, but I’m filled with joy when I sing that.”

“It feels exactly like it sounds — it’s like going to church. Music is religion to me. I don’t care who gets offended by that. It’s my religion. And it’s a helluva lot better than every other one I see out there. I remember the child having a wonderful home that was full of music, but I also remember it being a place full of fear and worry and anxiety and fear and shame because my mother had a [mental] illness. It was a dark cloud over our lives. In order to deal with that and escape my life and my loneliness and pain and anxiety, I would put the headphones on and listen to Aretha Franklin or Stevie Wonder. I would dance like a lunatic and see myself as the person on stage. We all do this. Listening to ‘Can’t Stop the Feeling,’ I realized it’s about that experience.”

“Joni Mitchell did the most seductive and sexualized recording of this song that just oozes sexuality. It’s about Larry Klein, whom she ended up marrying. I remember being in London as a teenager and hearing this and thinking it’s just so insanely good and so gorgeous. Cut to the first record I record in America and who’s playing bass on the record but Larry Klein. It’s one of those life-changing moments. I had to do that song because of Larry and knowing that it’s about everything that female artists go through.”

“Smoke on the Water”

“I’ve done it since the mid-2000s. I heard back from members of Deep Purple, which is amazing. They loved it. When I was a kid, my big sister had a boyfriend who was really into hard rock. He introduced me to Deep Purple. I never understood what they were talking about. I'm not joking. But who cares? All we were listening to was the riffs. So what I wanted to do with it was have you hear the story as if it were folklore."

“I labored over the lyrics. The thing about 'tell me more/tell me more' is that feeling that a relationship would have never ended. [Once I understood that], it became a jazz torch song. The horns give it that tension. It’s about somebody breiang down. I love singing that song. The moment I sing the first line, “summer loving,” you can feel a shimmer going through the room. Then, people sign on and cry and get upset. It’s one of the most successful re-imaginings that I’ve done. It's insanely different from the original."

"I do have the most incredible rhythm section. When you have that much pocket, you just want to go with it. Everything comes from a live place. It’s all about being in the room and having fun. It’s a great funky song. It's got the wit to it. It really nails my humor. 'Play that funk music, white girl' just makes me laugh. It makes me scream and laugh every time I sing the song."

“It’s just one of the most perfect songs ever written. Paul McCartney wrote songs of such unashamed beauty and melodic perfection, it’s shocking to me to this day. What I heard it in it is that it goes somewhere more akin to Mozart or Bach. I take it into the realm of classical because that has always moved me in a way that makes it seem like it's divine and I'm not even a religious person.  It’s a Civil Rights movement song and extraordinarily what that song means to me is that it’s about what it feels like to be finally free from depression and be accepted and appreciated. It’s about being seen and unafraid of being seen. It has a different meaning for me but not really. It’s about acceptance and being free from this chained state. Mine was to my own illness.”

“Dream a Little Dream of Me”

“It’s one of the great American songbook songs. It’s about loving someone so much that you can’t wait to wake up to see them. In my mind, it’s about not wanting the night to end because it’s the only night you’ll see them. It’s the dream of the person of the person who knows they’re not the love of someone’s life. It provides a bookend to the Drake song.”