To be sure, the Cleveland Orchestra’s Prometheus Project — playing all nine Beethoven symphonies over a two weekend stretch — is an over-the-top attention-grabbing stunt. It’s the equivalent of performance clickbait or, as music director Franz Welser-Möst described last year, a “sort of sports event.” But that doesn’t mean the performances so far (there are showings of Symphony No. 9 tonight and tomorrow) haven’t been divine. That doesn’t mean that those who’ve endeavored to take the plunge, like myself, and immerse themselves in a nightly dose of Beethoven haven’t been rewarded with sweet revelations.

Beethoven is a rock star of the orchestral world. He’s brooding and emotional, and most of all — that hair. His works, despite being nearly 200 years old, are performed everywhere from high school gyms to national TV commercials on the regular. The Fifth Symphony’s line “duh duh duh duhhhhhhhh/ duh duh duh duhhhhhhh,” has rolled around in your head more than once, as has the Ninth’s “Ode to Joy.” It makes sense the Cleveland Orchestra is taking on this symphony cycle in celebration of it 100th anniversary season.

A German who lived mostly in Austria, Beethoven has become a sort of legend. Things we know: Deafness did not stop him from composing. He never married. He died at age 56 of a prolonged illness that may have been alcohol related. The phrase “there is a story” is often used before little tidbits of supposed Beethoven truths, just like the antics of George Washington or Abraham Lincoln, as seen in the feel-good film of 1995, Mr. Holland’s Opus:
But no matter how well performed, or how important they’re supposed to be, not all of these impeccably-written symphonies are going to stick with you. As Welser-Möst said in the concert liner notes, some of the symphonies are not completely obvious. In other words, some of these are somewhat boring, some of these won’t make you feel deeply and wholly. The point of this series though, is to hear these works in a short amount of time and understand how Beethoven grew as a composer, philosopher and man. It is an event worthy of being enjoyed once in one’s lifetime.

Each night I made note of the usual things such as how the orchestra played, but also more peripheral aspects of the performance like how Welser-Möst’s hair (so very much like Beethoven’s) looked or how many people had fallen asleep around me (it’s not a classical music concert unless someone dozes off, seriously). While every evening included an overture, I chose here to focus on the main works.

Here’s how the orchestra fared each night: 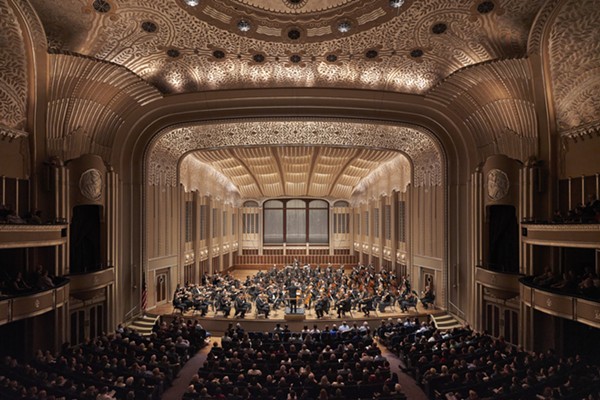 Night 1 - May 10
Symphony Nos. 1 and 3
Number of sleepers: 1
This is where the whole thing begins. Symphony No. 1 shows Beethoven as a young man writing somewhat like Mozart, while still putting his own spin on an older style. The orchestra played the starting elongated chords with moving expression, but it was the final movement that brought the passion. Naturally, it was Symphony No. 3, or “the Eroica” which was first dedicated to Napoleon, that took the cake on the kickoff night. Beethoven is a master builder of layers, especially on display in this work. While the second movement did start off somewhat shaky, footing was found immediately. And while the first movement may be more well known, the fourth movement was unbelievable. The action made the room hot with breath and anticipation. The standing ovation at the end was deserved and real.

Night 2 - May 11
Symphony Nos. 4 and 7
Number of sleepers: 2
As it was a Friday night, and people had no doubt worked a long week, Symphony No. 4 caused at least two concertgoers around me to doze off. It is one of those even number symphonies that isn’t as often played or enjoyed. But the piece has so much to offer, with its power coming in waves. Thankfully, at the start of Symphony No. 7, the one many cite as their favorite of the bunch, people woke up. The orchestra brought its A-game, but perhaps not as much feeling as was required. Seven’s quiet-then-roaring second movement, almost seemed too thought-out and plodding. The final movement showed off the orchestra’s marching spirit and brought the crowd to their feet with its conclusion.

Night 3 - May 12
Symphony Nos. 8 and 5
Number of sleepers: 1
Saturday night’s performance had the most palpable energy. The audience gave it to the orchestra, and the players reciprocated. Symphony No. 8, possibly the most misunderstood of the bunch, offered fascinating flourishes but often left minds to wander. According to the concert liner notes, “there is a story that Beethoven, when asked why the Seventh Symphony was more popular than the Eighth, snapped back: ‘because the Eighth is so much better.’” But as with the night’s before, the second half was what everyone came for. This time it was Symphony No. 5, the most obvious of them all. The orchestra started off those well-known big chords with a bang. Welser-Möst then let his crew go, faster and faster, while still never coming undone. On the whole, it was probably the finest performance of every night I saw. It was wild, but had heart. Walking out, one concertgoer told a friend he would have preferred they play the Fifth twice.

Night 4 - May 13
Symphony Nos. 6 and 2
Number of sleepers: 2 (but they were small children, so doesn’t exactly count)
It was somewhat of a surprise for the orchestra to play Symphony No. 6 in the first half of the show. The Pastoral Symphony, as this one is known, is one of the more happy and liked of the works. During the more stormy passages the orchestra could have dug in a little more, but it was overall a lovely performance. For the second half of the afternoon show, with the Cavs trailing the Celtics by about 20 points in their Finals matchup, Welser-Möst brought the heat. It’s like he’d woken up from a nap and was ready to let loose (as was his hair). The Second Symphony shows Beethoven moving away from that more classical sound. It had moments, but was still something to be endured. The Lenore Overture No. 3, the show’s finale did seem to garner the most attention from the players ...and the audience. Night 5 - May 17
Symphony No. 9
Number of sleepers: 1
It was all leading up to Symphony No. 9, Beethoven’s masterpiece. Featuring 200 or so performers on stage, the work seemingly has everything. It’s like Beethoven sat down and thought about what was successful with his most popular symphonies and decided to do that. This has more sound, more humable lines, a freaking choir and four vocal soloists. The soloists weren’t always easy to hear, but it’s hard to compete with such a large ensemble. The fourth movement builds and builds to a joyful and miraculous conclusion, one that would cause the most icy of hearts to melt. Every musician should be so proud of this evening. It will be remembered.

Final thoughts:
- The whole of the wind and brass section needs to be commended for mostly immaculate playing. That being said, while flutist Joshua Smith slayed every single solo he was given, the star was clarinetist Afendi Yusuf. Such purity and soul is rarely found on this planet.

- For the last few centuries, orchestra-goers have followed the tradition of refraining from clapping between movements. People who know this rule pride themselves of knowing the proper place to applaud; they may even look down on those who get it wrong. But Saturday, following the famous first movement of Symphony No. 5, a lone dissenter yelled “bravo!” from the audience. He was not wrong. The orchestra had just shredded the piece. It’s too bad orchestra fans are not allowed to express their gratitude a bit more freely.

-Public Service Announcement: You can pre-order your intermission drinks from the bar prior to the performance. Just show your ticket and pick up the beverage in the lobby at a designated corner table. No lines. No fuss.

-In general, the more basses on stage the better.

-As I sat in a different spot every night at Severance Hall, it’s confirmed, there are no bad seats.

-Attire ranged from jeans and nice tops to beautiful suits and dresses. How wonderful there is no official dress code at Severance Hall. How wonderful we’re not a city full of snobs.

-With this series, the orchestra has once more proven its majesty. Now onward to a new century of music, which should of course include Beethoven, but also new works. There’s much to discover by re-listening to old favorites, now let us celebrate the future.

You can attend the final two nights of the Cleveland Orchestra’s fiery Prometheus Project tonight and tomorrow, both of which feature Symphony No. 9. Find tickets here.