Xyla Foxlin is a mechanical and aerospace engineering major at Case Western Reserve University, a robotics whiz kid, the founder and inventor of Parihug, a pilot, former president of CWRU's Robotics Mining Team, the founder of Beauty & The Bolt (an online village where anyone can learn physics, math, engineering, making), a violinist and oh yeah, the reigning Miss Greater Cleveland.

Thanks to the popularity of shows like Toddlers and Tiaras and the film Miss Congeniality, there's a preconceived notion regarding the type of woman who normally competes in a beauty pageant.

Caitlin Upton's memeworthy "such as the iraq war and such as" answer during Miss Teen USA solidified the perception that beauty queens are total airheads, despite the fact the Miss America (not the same as Miss USA) Scholarship Organization gives more scholarship money to women than any other organization in America.

"I was really interested after seeing John Oliver’s sketch on Miss America," Foxlin told Scene. "I thought it was hysterical my resume matches what they claim they want, I wanted to challenge the system and see if they really are who they claim they are."

Foxlin is well aware of the stereotypes that exist in the world of pageantry, but she says her goal is to shatter the misconceptions.

"Over [this] winter break I pitched the idea to my mom and my mom asked why I would do that to my career because I’ll have to explain the 'pageant title' and live that for the rest of my life," says Foxlin. "My mom said you are a person that could break all those stereotypes but do you think you can change people’s minds and be an example?" 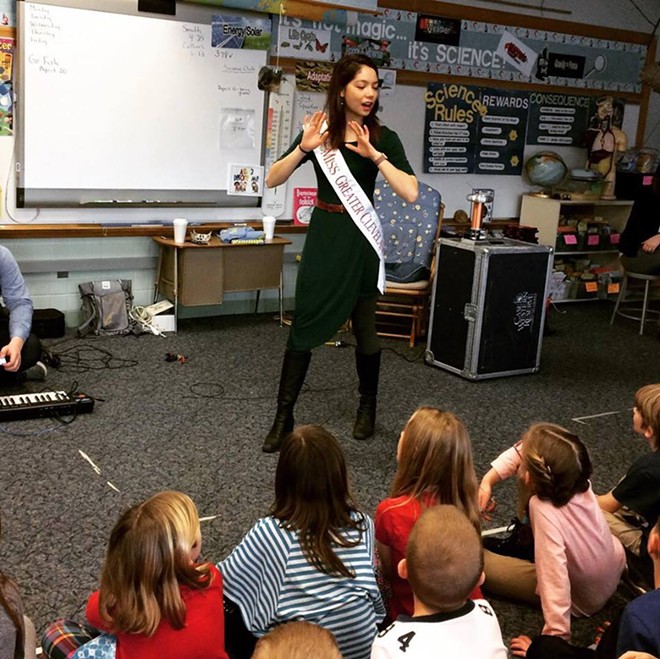 "I don’t know any other engineers that have competed in pageants, but I was always a girly-girl that dreamt of being a Disney princess," Foxlin says. "I was raised in a very stereotypical feminine way, but I was told if I wanted to be an engineer, I had to be a tomboy. A lot of people accidentally raise their girls to believe you have to be one way or the other and push that notion on young girls, I like to shatter expectations."

After years of being told girls can't build robots or fly airplanes, Foxlin tries to spend as much time volunteering with elementary schools to make sure they don't feel the same way.

Given that Foxlin is an active member of the tech community, and was even featured as the star in a commercial for Microsoft, her STEM (Science, Technology, Engineering and Mathematics) background is not something typical of traditional Miss Ohio competitors.

Even before competing in Miss Greater Cleveland in February (her first ever pageant), Foxlin was already breaking down barriers with her non-profit, Beauty and the Bolt. "I teach people engineering without changing the way I look. I wear a dress," she says. "The hope is that girls won't have this conditioned idea of what they need to look like to be into engineering."

Foxlin's non-profit does has Disney princess roots, as the name itself is a play on Beauty and the Beast.

"Belle is an engineer, an inventor and a designer." She continues, "Our motto is 'brilliant is beautiful' and I figured what better way to prove it than to win a pageant."

Foxlin's win is monumental not only for women in STEM, but she is also the first person to ever play a Tesla Coil via electric violin for her talent and is only woman of color competing in this year's Miss Ohio pageant.

Foxlin hopes to join the ranks alongside Erika Ebbel, Miss Massachusetts 2004 and a PhD holder in Biochemistry from Massachusetts Institute of Technology (MIT). "I really want to use the Miss America pageant as a platform to encourage more women to pursue engineering."

Foxlin's presence in the pageant world has been eye-opening not just for those that may not understand pageantry, but has also been a moving experience for her personally.

"I was very satirical about competing until the day I walked on the pageant stage," she says. "The girl I sat next to had entered many that season. Her dad committed suicide when she was a child and she stopped talking— pageants have been a form of speech therapy for her, and it’s what taught her she could be beautiful and confident. It really changed my perspective of pageant girls and who they are and what they are."

As an outsider to the pageant world, Foxlin was pleasantly surprised to have her own expectations shattered by the program.

"Pageant girls tear each other down less than tech girls do, believe it or not," she says. "When I showed up at Miss Cleveland, another girl did my hair for me and she wasn’t upset when I won the title." "Hair isn’t what got you the crown,” she says "And that’s something pageant girls understand."

Despite being a completely self-funded competitor and admittedly "horrible" at styling her own hair, Foxlin is confident in her decision to compete in Miss Ohio.

"I think pageants reward a skill that isn’t rewarded anywhere else," she says. "There are life skills, public speaking skills, and interview skills. If engineers had to do a pageant, our field would be completely different."