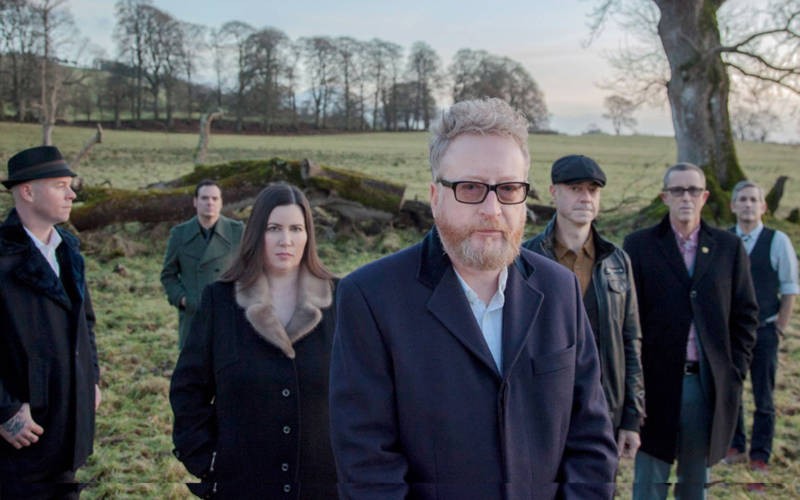 Irish punk rock bands Dropkick Murphys and Flogging Molly have co-existed for the past 20 years and have even toured Europe together. But they've never toured the States together.

Until now. For the first time, the groups will embark on a co-headlining tour of the U.S. The tour's first date takes place on Friday, June 1, at Jacobs Pavilion at Nautica.

In separate interviews, Flogging Molly singer-guitarist Dennis Casey and Dropkick Murphys drummer Matt Kelly speak about how the tour came together and reflect on their band's legacies.

How did the tour come about?
Casey: We’ve been talking to [the guys in Dropkick Murphys] for years about touring the States together. You have scheduling things that get in the way. We played a show in Milan, Italy, and there were like 8000 people there going crazy. We talked about the show and decided we needed to do [a co-headlining tour]. We booked a European tour that was over-the-top great. We played Germany and Austria. We wanted to bring it to America. We’re going to do the Eastern side of the country and then the Western side later on.
Kelly: Well, the European tour we did with Flogging Molly earlier this year went so well, and the demand from fans here was so high, we figured it made sense to bring it to these shores. Plus, the bands get along well and have known each other for going on two decades.

What do you like about your tour mates?
Casey: Personally, they’re great guys. Musically, they’re different. Our singer Dave [King] is from Ireland. He has a different perspective lyrically and sonically. The Dropkick Murphys are from Boston and have that aesthetic going for them. What ties it all together is that there are Irish American roots in both bands. We share that passion for Celtic culture and the heritage and the music. There’s also the punk rock element. We grew up on that stuff, and we love the same bands. Together, it’s a great package. It’s a great event. You can get your Irish on at this thing for sure.
Kelly: They’re a great live band, and they give it their all night-in and night-out. They do a style similar to what we do but more of a “traditional music with a punk edge” as opposed to the “punk with a traditional edge” that we do. When they’re fiddling, we’re always skiddling, and we toorah-loorah while they hey-diddle-diddle. We’re smashingly complementary to each other.

When you first joined the band, did you have some sense it’d still be going strong all these years later?
Casey: Oh my God no. The band didn’t even have a record out. We were just doing pub shows at the time. We signed with SideOneDummy Records, and I was happy I got to quit my day job. I didn’t mind sleeping on people’s floors. I had a very low bar to jump over. I thought after 10 years, we should pat ourselves on the backs. In rock 'n' roll, ten years is a long time. The Beatles and Led Zeppelin only lasted about ten years. Now, 20 years into it, we’re a family. We’ve all met our families. We’ve had kids. The roots have grown really far down, and we’re a solid unit. I always wanted it to continue. It would’ve been hard for me to fathom it would have been going for 20 years. It’ not that I didn’t think the band wasn’t good enough, but it’s a tough business, and I consider ourselves fortunate. We also have a wonderful fanbase. It’s part of what keeps us going. If you had told me 20 years ago that I would have been playing in these venues that we play in, I would have laughed at that.
Kelly: I wasn’t sure what the hell was going to happen. In 1997, I was barely 22 years old and knew I didn’t want to bag groceries and work in warehouses for the rest of my life. I knew I liked this band a lot and basically prayed for the best. It has changed my life in multifarious positive ways that I won’t even begin to bore you with.

Last year, you released a new studio album. Talk about what you tried to do differently with that album.
Casey: We hired a different producer. We had a new drummer. We went back to where we recorded our Float album. We didn’t want to do something really different. It was six years since we put the last record out, and life happens. My father died, and Dave’s mother died. These things stepped in the way but also inspired the record. There were songs about Dave’s mother and my father. Life carries you forward, and you just reflect on it. I like to say that a record is like that moment in time. It’s about who we are at that time.
Kelly: First off, we recorded it in Tornillo, TX, on the border of Mexico. We spent three weeks there banging out track after track. We had never recorded outside of the Boston area before, and this was a big change for us — but the isolation gave us the ability to focus on recording the songs and fleshing out the few that needed that extra attention​.​ Additionally, we wanted to give the songs a big, anthemic quality, so it wasn’t all breakneck speed and a quick shout here and there. Sonic Ranch studio was just inspiring, and the staff were so cool that it made it a pleasure— we weren’t pining to go home at every second.

Talk about the year you’ve had so far. You’ve been touring steadily, haven’t you?
Casey: I love playing on New Year’s Eve, and we played two nights in Chicago. It’s a fun thing to do, being in a band like ours. We sold out the Palladium in Los Angeles. I saw Nirvana there and Bjork and Tool — all these great bands. That was a great show. We did our annual Filthy Dog Cruise. We do it every year, and that’s what you would call too much fun. It takes a week to recover. It’s non-stop day and night. Every band that does it wants to do it again. It’s a great festival on a boat, and you don’t have to go back to your car and drive somewhere at the end of the night. I grew up on Lake Ontario in Rochester, and you can relate to what it’s like to go to Florida in the winter. I don’t need to explain to you that it’s a wonderful break.
Kelly: Our last gig was March 18 at the end of our annual St. Patrick’s run. Great, great tour this time around, with our old friends and my personal heroes Agnostic Front. It had been 20 years since we’d toured with them, as well as 21 years since we’d toured with the other band on the bill, our friends Bim Skala Bim. It was an absolute blast. The gigs were almost all sold out, and the reaction to the bands went anywhere from appreciative to jubilant. We count ourselves very lucky to be doing what we’re doing.

You’ve both played Cleveland numerous times. What’s your best memory of the city?
Casey: Mighty Mighty Bosstones took us out on one of our first tours. Sum 41 opened. We played the Agora, and we got up to some hijinks. I think someone had brought a bottle of whiskey. We got pretty tipsy, and I don’t know why, but there were these tricycles backstage. We rode them out onto the stage during the Mighty Mighty Bosstones set. They got a kick out of it.
Kelly: The Euclid Tavern in 1997. During our set, there was a huge rumble with different factions of skinheads, punkers, etc. We attracted a rough crowd back then, some of which from time to time we’ll see at our gigs. I saw cue balls being chucked around, tables and chairs being used as weapons and shields, etc…. and it was kind of a happy-go-lucky sort of rumble, violent but not malicious, if you can imagine. I remember it being a really fun set, and we just played on, bemused at the insanity unfolding before our eyes. Classic stuff from a sadly bygone era. No cellphones, no social media — just good old-fashioned having fun at the gig. Other than that, a former member of our band, Ryan Foltz, is from Cleveland… So it made it extra fun when we played your fair city.