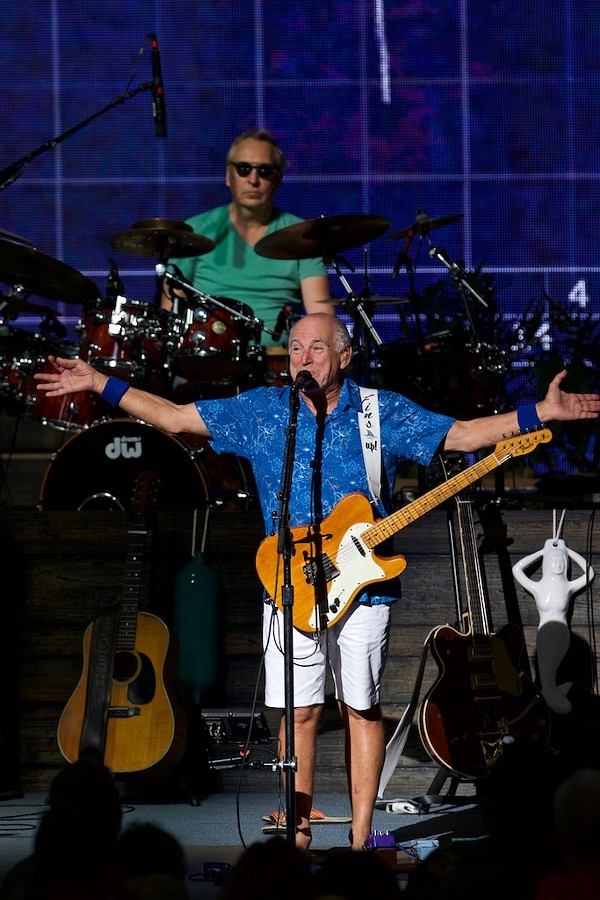 Jimmy Buffett and the Coral Reefers kicked off Blossom Music Center’s 2018 summer season last night, and more than 20,000 Parrotheads of all ages flocked to the outdoor venue for the sold-out performance. Tailgating began at 4 p.m., so the fans were good and liquored up by the time Buffett and his crew took the stage. Beach balls were in the air as early, and one fan was overheard preparing her friend for the show by saying, “It’s a total experience. It’s the happiest place on earth.”

The lawn was a sprawling ocean of neon leis, shark hats and pineapple-print Tommy Bahama button downs. These Parrotheads came dressed to party. And party they did. Many were already passed out as the show had barely begun. We had entered drunken sailor Disneyland, and there was no turning back now.

Buffett began his set with feel-good hits like “Livingston Saturday Night,” “The Weather is Here, Wish You Were Beautiful” and Alan Jackson’s “It’s Five O’Clock Somewhere.” The stage was designed like a giant sailboat and flowing sails draped above the band. Barefoot and tan, Buffett, who wore a huge, carefree megawatt smile, was the ultimate boat captain.

This beer-drenched tropical booze cruise was going places. Buffett welcomed singer Caroline Jones to the stage to perform “Come Monday” and “Trip Around the Sun.” Then, came “Son of a Son of a Sailor” and the band’s massive hit “Cheeseburger in Paradise.” Buffett took what he called a wine break and left the stage as members of his band continued with a dreamy instrumental set, and then Buffett was back for an acoustic medley of the Beatles’ “Eleanor Rigby” and “King of Somewhere Hot.”

Buffett brought Jones back out to help him sing and play harmonica for a beautiful version of “Coast of Marseilles.” Next up was the upbeat calypso song “Changes in Latitudes, Changes in Attitudes” — the tune featured appropriate lyrics like “if we couldn’t laugh, we would all go insane” as the crowd sang along, laughing and riding the high.

Buffett is one happy guy. He radiates positivity and good feelings; he regularly giggled and kicked beach balls into the crowd. He may as well have invented beach culture because he’s so damn good at it. The good times rolled with a shark attack of fan favorite “Fins Up” and then we all entered the Pirate’s Cove for “A Pirate Looks at Forty.” Next, it was time for some melancholy nostalgia for the hometown anthem “Back Where I Came From” with shots of Alabama on the backdrop screen turning to cityscapes of downtown Cleveland.

The self-reflection moment didn’t last long because the next stop on this party cruise was “Margaritaville.” Parrotheads shook their salt shaker booties as they joyously sang along with Captain Buffett. A postcard graphic reading “Greetings from Margaritaville” blazed behind the band. You could practically feel the sand in your toes and the sun on your face during this euphoric tropical escape.

The encore began with an enthusiastic rendition of Van Morrison’s “Brown Eyed Girl” that found Buffett really connecting with the fans, punctuating the song saying, “Summertime’s here!!!” His blissed-out energy infected the crowd as friends and lovers put their arms around each other and sang along. During the final song, Bob Marley’s “One Love,” something became clear as the boat began to pick up its anchor. You don’t simply attend a Jimmy Buffett concert. It’s a much bigger experience. Buffett gave his flip-flops to a fan and signed autographs as he left the stage, his devoted Parrotheads waving goodbye as the happy-go-lucky legend left Cleveland for his next stop in nautical Never Neverland.