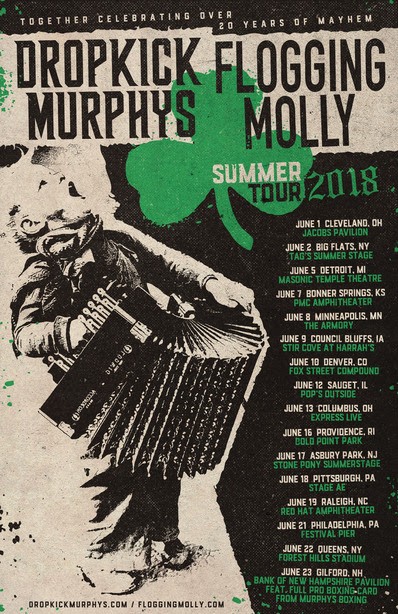 Irish punk rock bands Dropkick Murphys and Flogging Molly have co-existed for the past 20 years and have even toured Europe together. But they've never toured the States together. Until now. For the first time, the groups will embark on a co-headlining tour of the U.S. The tour's first date takes place tonight at Jacobs Pavilion at Nautica. Should be a rowdy good time. (Jeff Niesel) 7:30 p.m. Jacobs Pavilion.

Into the Blue: Grateful Dead Revival

Regardless of your take on the Grateful Dead, the band to which Into the Blue, an ensemble of local musicians pays tribute, the group maintains a damn important stature in the rock 'n' roll canon. Into the Blue revives that spirit and lends it the respect Jerry and Co. rightfully deserve. Anyone interested in hearing — and seeing — great music flow from the stage should check out what these guys are doing. Fellow musicians and artists will glean inspiration. (Eric Sandy), 9 p.m., $12. Beachland Ballroom.

This Pittsburgh-based band started writing songs for its new album, Madly in Love at the End of the World, last year. When it had "a dozen or so" songs ready, it worked them into the live sets; the recordings took place at the end of last year and earlier this year. The album starts with the twangy "She's on Fire" and then proceeds to show off the band's musical range. The title track sounds great with cello as friend Simon Cummings from the Pittsburgh group Cello Fury adds to the dramatic song's rendering. (Niesel) 8 p.m., $20. Musica.

Dave Matthews Band continues to be so popular that the group can sell out venues even if it doesn’t have a live album to promote. But this summer, the band will come to town in support of Come Tomorrow, its ninth studio effort and its first album of new material since 2012's Away From the World. The disc's first single, "Samurai Cop (Oh Joy Begin)," isn't a huge departure from what the band's done in the past. The mid-tempo tune features gruff vocals and heavy percussion as Matthews sings, "let's not forget these early days." (Niesel), 8 p.m. Blossom.

After 2016's Stoney turned rapper/singer Post Malone into a household name, the guy returns with the well-crafted beerbongs & bentleys. Tunes such as "Spoil My Night" and "Takin' Shots" sound like they were cut in slow motion as Post Malone puts a heavy filter on his vocals and ratchets up the production values, mixing in percolating synths, rattling drum machines and ornate string arrangements. (Niesel), 8 p.m. Jacobs Pavilion.

It’s that time of the year when every weekend brings with it another festival.
This weekend, the Agora Theatre and Ballroom will host the fifth incarnation of its annual Spring Fling. The Front Bottoms will headline tonight and indie rockers Andrew McMahon in the Wilderness will headline tomorrow night. Check the Agora website for a full list of the bands slated to perform. (Niesel), 3 p.m., $42.50. Agora Theatre.

Nathaniel Rateliff & The Night Sweats/The Head and the Heart

Earlier this year, indie acts the Head and the Heart and Nathaniel Rateliff & the Night Sweats announced that they’ll partner up for a spring co-headlining tour. The tour is only hitting a few cities, and Cleveland is lucky enough to be one of them. Rateliff has just released Tearing at the Seams, a terrific collection of old school R&B/soul tunes that sounds like it was recorded another era, and the Head and the Heart are still touring behind 2016's Signs of Light, the album that yielded the lilting hit tune "All We Ever Knew." (Niesel), 7:30 p.m. Jacobs Pavilion.