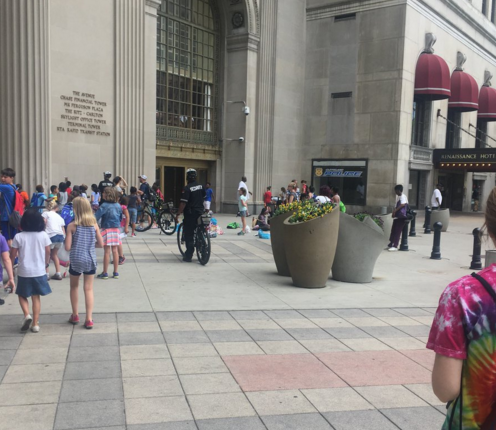 Third graders from Onaway Elementary in Shaker Heights visited downtown yesterday on a field trip to learn about the different materials used to construct various buildings and landmarks in Cleveland.

It's a trip that grade has made the last ten years or so and this one included a stop by the Soldier and Sailors monument, the arcade and Tower City. It was that last stop that caused a bit of unforeseen trouble, as it appeared Dan Gilbert's Bedrock security team found the presence of little kiddos intent on learning about marble, limestone and fossils an annoyance, if not a very real threat.

Matt Rolf, a chaperone on the trip for his daughter's class, tweeted, "Tower City Security is kicking out 3rd graders learning about the marble in the entry way. We’re being told this isn’t a public space!"

That seemed like a pretty drastic move, what with the fact that they were third graders and Tower City is a bustling public space, but Gilbert's Tower City security team also forced people out of the lobby on a seven-degree day while they were waiting for a bus last winter, so it wouldn't exactly be beyond the pale for Team Gilbert to demand that a bunch of eight year olds just move the hell along and stop being so damn interested in this historic place and its architecture, please and thank you.

Anyway, we checked in with a Bedrock spokesperson to find out more. Here was their explanation:

“Tower City is a civic gem, and the public is and always will be welcome.

Earlier this morning, a group of third grade students visited our property at Tower City. During the visit, on-site security personnel noticed a potential safety issue as students were sitting and laying on the ground inside the mall, near an entrance to the building.

We would gladly welcome these students back any time.”

That didn't seem to jibe with Rolf's account, which he elaborated on during a call with Scene this morning.

"Yeah, that's not what I told [the spokesperson] either," he said. "We were outside for a little bit and the teacher was talking about how the building's exterior is made of limestone and sometimes there are fossils in limestone. The security started following our group, these guys on bikes. Then the teacher gave the kids magnifying glasses to see if they could see any fossils, and security started telling them they shouldn't be doing that, saying people could have peed on the building.

"After that we went inside and the teacher was talking and I was approached by security again. He said you guys can't be here, it's private property. I told him we'd done this the last ten years and that in any case we'd be done in a few minutes. He said they were under new ownership, you can't be here. They continued to pressure the teachers until we left. They weren't obstructing any doors or anything. My impression was because we weren't customers of the casino or the mall, we had to go."

This isn't to bang on the individual security guards. They are, after all, likely just taking the orders of management. But, like the example of the folks waiting for the bus in the dead of winter, it clearly shows that whatever guidance those security guards are receiving needs to improve. Why, on a public sidewalk next to Public Freaking Square, do two security guards on bikes need to follow a bunch of kids, for example? Not to mention that Tower City is very much a public space, one with a public transit station, a post office, etc., and not just an entrance to a casino.

These conversations about public space in downtown continue. Most of the time the emphasis is on ensuring that it continues to be a welcoming and safe place without discrimination based on race or wealth. Little did we know we'd have to include third graders in that dialogue, but we apparently we do to thanks to Dan Gilbert.