The G.O.A.T. from Akron is in the NBA Finals for the 8th Year in a Row 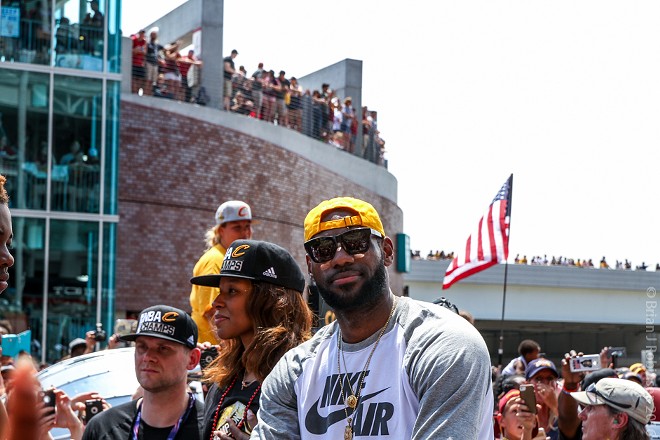 Only four other people besides LeBron James have ever made it to eight consecutive NBA Finals series, and all of them were members of the Bill Russell-led Celtics dynasty of the late fifties and early sixties when most of the league’s players were white.

With LeBron’s Cavaliers set to tip off as overwhelming underdogs in a fourth straight Finals matchup against the Golden State Warriors tonight, the most amazing thing about it is that there’s hardly anything the Warriors could do in this series that would outshine the greatness of King James or diminish his status as the most dominant force in the NBA.

So if the Warriors end up steamrolling the Cavs like everyone in the world expects them to? Congrats, you got the second-best player in the league to take a multi-million-dollar pay cut to join a 73-win team with three more All-NBA talents that lost the title to the Cavs the year before.

Meanwhile, LeBron is here with Jeff Green and Kyle Korver, playing for his hometown team despite its inept owner and front office because that’s where his presence is the most meaningful, and refusing to accept less than a maximum salary because that’s what’s best for the players’ union.

It’s been wildly popular among media and fans alike to speculate that LeBron will play somewhere else next season due to the failures of the Cavs’ front office. But these failures have only made his greatness more apparent during this playoff run, underscoring how little he has left to prove on a basketball court in Cleveland or anywhere else. Here, it’s worth remembering how little his decision to return to the Cavs in 2014 had to do with basketball in the first place:

“I feel my calling here goes above basketball,” James said in announcing his return. “I have a responsibility to lead, in more ways than one, and I take that very seriously. My presence can make a difference in Miami, but I think it can mean more where I’m from.”

While it’s important for LeBron to maximize the value of his labor, and he effectively does so by leaving open the possibility of signing somewhere else, it’s no less true today about his presence meaning more where he’s from. Of course, there will always be a fundamental tension between LeBron’s goals of ensuring a proper balance of power between players and ownership, remaining loyal to his hometown, and fulfilling a calling that’s bigger than basketball in the process. That he would even try to achieve all of these ends at once, let alone enjoy such success in having done so, is simply unprecedented.

Of course, it’s not just about having talent, it’s about how one uses it. Which is why no matter what happens in this Finals series, the best story in sports will still be LeBron James, the G.O.A.T., in Northeast Ohio. The chance that he might do the impossible again by beating these Warriors, and that millions of Cavs fans will be electrified until the series is over to see if he does, is really just gravy.