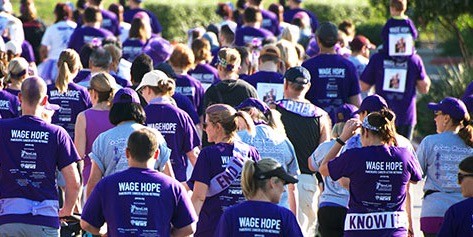 When looking at the statistics for all stages of pancreatic cancer, the mortality rate after five years is 91 percent. Meaning, if there were 100 people with pancreatic cancer standing before you, only nine of them would remain in five years.

I am hoping that in March of 2019, on my five-year 'cancerversary,' I will be one of those nine people.

Survivors, impacted families, loved ones, researchers and advocates committed to rewriting the future of this deadly disease will all join together to raise awareness for an often overlooked cancer. All of the funds raised will directly support patients and their families.

It's difficult to put into words what it feels like to be diagnosed with pancreatic cancer. Calling it a "death sentence" sounds too cinematic, but calling it "scary" doesn't come close to encompassing the life-altering diagnosis.

Due to the efforts of the Pancreatic Cancer Action Network and events like PurpleStride, the National Cancer Institute (NCI) funding for pancreatic cancer has been boosted by 500 percent, but it's still nowhere near enough.

Despite the survival rates being so horrifically low, funding for pancreatic cancer is notoriously lower in comparison to more "publicly popular" cancers that boast higher survival rates like lung, skin and breast.

Unfortunately, due to the lack of pancreatic cancer survivors, support groups for those that have beaten the cancer are somewhat nonexistent. PurpleStride offers a community for those impacted by the disease to band together and form a bond around a disease that leaves those affected feeling isolated and afraid.

As I write this piece, I am missing half of my pancreas, my entire spleen, 22 lymph nodes, eyebrows that have decided to never grow back after falling out and a strong immune system. I've gained a nearly foot-long scar across my abdomen, a wicked amount of survivor's guilt and a history of medical bills that brings my student-loan debt to their knees.

The only way to combat the awful statistics of pancreatic cancer is to push awareness into the public consciousness and fund research endeavors that can assist in treatment and early detection. PurpleStride Cleveland is doing just that, and this almost survivor is eternally grateful for the efforts.

It's about time that we make purple the new pink.

Day-of registration is available this Saturday at the Cleveland Metroparks Zoo. Opening ceremonies begin at 8 a.m., 5K run begins at 8:30 a.m. with the 1-mile walk beginning at 9 a.m.