Don't Let the IHOP Name Change Distract You From the End of Net Neutrality, Which Went Into Effect Today

Net Neutrality was implemented during the Obama administration in 2015, prohibiting internet providers from charging more for specific online content or from giving preferential treatment to certain websites. 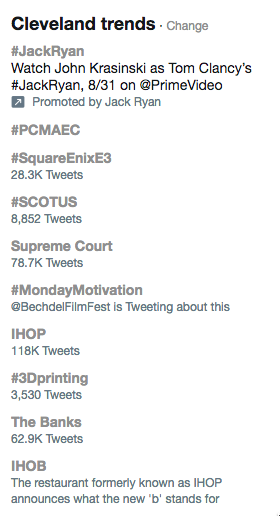 Sure, watching the comedic genius that runs the Wendy's Twitter page absolutely read IHOb to filth over the name change has been entertaining, but Net Neutrality was repealed despite 83 percent of Americans wanting Net Neutrality to remain in place, and it went into effect right under our noses.

This is a massive change for equal access to information, but Clevelanders don't seem to be too concerned about the fact internet providers are now within their legal right to start deeply affecting what content you see and how fast you can access it (as seen with its Twitter trends at right).

It is a relief to see that Clevelanders are also rightfully concerned about the Supreme Court ruling in favor of Ohio's voter purging law, but IHOP/IHOb listed twice under the Cleveland trends is a little worrisome.

According to Engadget, at least 29 states have introduced more than 65 bills aimed at protecting net neutrality and seven states — Hawaii, New Jersey, New York, Montana, Rhode Island, Oregon and Vermont — enacted executive orders that made it illegal for state agencies to enter contracts with ISPs that don't uphold net neutrality.

As it stands, the Internet is soon likely going to function like cable TV, and we're all going to be ecstatic about having to call internet customer service help lines more frequently.

ISPs will be able to charge us more to access sites we currently visit for free, cap how much data we're allowed to use, redirect us from sites we are trying to use to sites they want us to use instead (like Bing instead of Google), and block us from being able to access apps, products, and information offered by their competitors or other companies they don’t like. They can even prevent us from being able to access information on certain topics, news events, or issues the ISP doesn’t want us to know about.

So what can we do?

Call our state representatives, call our senators, cry ourselves to sleep, pay more for services we love dearly and hope that our congress does something to right this wrong.