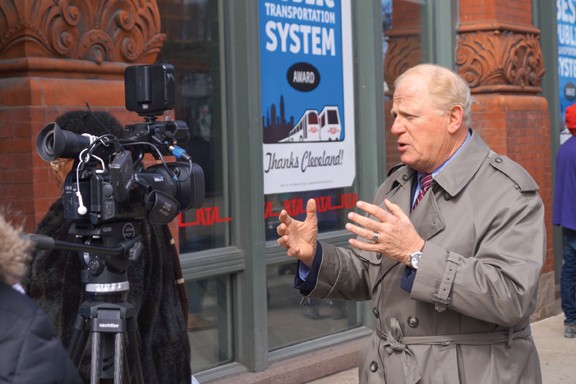 Amid declining ridership, fare increases, perpetual budget woes, a scandal that saw its board president ushered out the door, a separate healthcare scandal involving double-digit employees and more than a million dollars in fraud, frustrations and delays on the Healthline after a judge ruled its "proof of payment" system unconstitutional last year, a newly approved economic study and lingering talk about a possible tax increase down the road, RTA will also be looking for a new CEO.

Joe Calabrese revealed this week that he plans to retire at the end of his contract in February 2020. He informed the board of his decision last year, he said, well before a string of negative PR and scandals.

Serving for 20 years, Calabrese is currently the longest tenured leader of a public transit system in the country.

The usual budget crunch was exacerbated into a dire situation when Ohio ceased collecting a tax on Medicaid managed care services. In RTA's case, that meant the loss of about $20 million a year. Ohio pledged a one-time gift of $25 million to help plug the hole, but that's a short-term plug on a long-term hole. Looking forward, there's the talk of a tax increase, but also forecasts for widespread layoffs and route reductions.

A proposed fare increase set to take effect in August was postponed after vociferous outcry from the Clevelanders for Public Transit (CPT), which has lobbied for other common sense actions from RTA, such as installing a regular public transit rider on the board.

As for the economic study, the first undertaken by RTA in 21 years, Calabrese said, “If we did have to, in the future, cut more services what would the negative impact of that be. There are many people who want us to do more. I’m in favor of that but we can’t do more without more without more resources. But it would be great to justify what the return on investment might be for those additional dollars that could be invested in public transit. "

On the topic of resources, Calabrese added a reminder that funding from the state of Ohio has dropped from $43.5 million a year when he started to $6.5 million this year.