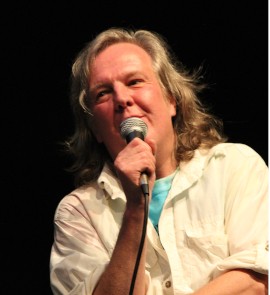 Hassett will talk about that book as well as his various other books (including the forthcoming On The Road With Cassadys) at 7:30 p.m. on Friday, June 22, at Visible Voice Books in Tremont and at 7 p.m. on Saturday, June 23, at Mac’s Backs Books on Coventry in Cleveland Heights.

In this recent email exchange, he explains why he became so interested in Kerouac and other Beat writers. He also discusses his unique approach to his book readings.

Talk about how you first became interested in Jack Kerouac?
From page 174 of The Hitchhiker's Guide to Jack Kerouac: It was the Grateful Dead that led me to On The Road and Jack in the first place! Reading articles about or interviews with them, I kept seeing references to this book by some weird-named guy I'd never heard of. Coming across it once or twice, it might not have stuck, but after seeing it three or four times, including his face in the back of every issue of Rolling Stone during those years that ran a classified ad for T-shirts with Jack's classic picture that was also used for the conference posters — and it became — “I've got to find this book!” The first time I ever held a copy was the same summer I first saw the Dead — 1980. A friend's older sister in Vancouver had it, and I had Fear and Loathing in Las Vegas, and she'd never read that — so we traded — the one and only time I ever let go one sacred text for another in my life. And it became just the first of many copies. Still have her original, of course. But from that sequence of synchronicity, I was forever on this most wondrous Road.

In what ways does his work inform your writing?
Kerouac was a master of language.  Some of the first books I ever read and loved were by Dr. Seuss. Then, I studied James Joyce in university. Kerouac is in that same lineage of playfulness with language. And also, he was a great storyteller. In one of his last interviews with The Paris Review in 1968, he said that books should be like "hearing a guy telling a long wild tale to a bunch of men in a bar." An advance reader of my upcoming book, On The Road With Cassadys, just yesterday described it as "like you're standing here telling me the story yourself." I hear that a lot. I want the prose to be friendly and fun and engaging — and not some sort of faux literary pretension. Just tell the damn story.

Any other connections?
Kerouac and I write really fast. He famously wrote the On The Road scroll in 20 days, and The Subterraneans in three. My first published book, The Temp Survival Guide, I wrote in six days.  I wrote The Hitchhiker's Guide to Jack Kerouac in 11. How The Beats Begat The Pranksters went from concept to finished book in two weeks. This new one, On The Road With Cassadys, took the longest — two months. Of course, there's editing after the initial writing, but the idea is to tell the story fast — and then it reads fast for the reader. And you get to the point quicker. There's no dilly-dallying, no old world old school six pages describing a room or something, just get to the damn point. Kerouac was a big teacher in that 'write fast' mindset. Of course, you can't just do it out of the blue. You've got to be writing and practicing your instrument every day.  I'm composing constantly in my head. Also, I think of my writing as composing music. Kerouac was a very musical/lyrical writer. Every piece of punctuation, every pause, every run-on sentence, every paragraph break, I'm intentionally guiding your eyes and brain — exactly how fast I want you to be moving through any passage. That kind of attention to the prose and guiding a reader's reaction and taking them with you on a fast-paced Adventure Tale is something I got from Kerouac.

What’s the best story you have from working with Bill Graham on the Rolling Stones tour in 1981?
One day in the office in New York, Bill was on the phone raving one of his legendary tirades to some guy, and this was going on for about five minutes, nothing unusual. Phones were ringing everywhere; it was the general pandemonium of pre-tour production/promotion. At some point, his secretary takes a call, puts it on hold, and says, "Bill, I got 'John Smith' (or whomever it was) on the phone." And Bill goes, "What?  I'm talking to John Smith.  Hello?  Hello?" And he'd been yelling into the phone for five minutes . . . and the line was dead.

You organized 50-year anniversary Writing On the Road tributes in New York and L.A. in 2001. What were those events like?
These two events open my new book due out in Sept., On The Road With Cassadys. Of the hundred or so shows I produced, that New York show was the best, and L.A. was right up there. By the time I did them in 2001, I'd been putting on similar shows in Manhattan for about five years, so I knew who to invite and who not. It turned out — not by planning but just organically — that those prior shows were all auditions or rehearsals. I knew by then who was a joy to work with and who was a problem, and for that New York show I brought in only the best of the best. There were about ten different musicians from various bands, and 15 or so reader/performers, and the whole way the thing flowed, and the Spirit everyone brought to the show — it was the kind of flawless five-hour peak-filled show you dream about putting on.

What were the challenges involved in writing The Hitchhiker’s Guide to Kerouac?
Writing Hitch was a great story! Believe it or not, it started as a comment in the Facebook Kerouac group. Somebody posted a photo taken at the now historic '82 Kerouac Super-Summit in Boulder, and everybody was all gaga over the assembled. To me, it was a picture of my summer vacation. Somebody said, "Tell us about it." I thought it would take a few minutes. Once I started writing it, I realized it was more than a Facebook comment! I just kept going.  I had no intention to write that book. But once I jumped in, I uncovered old notebooks and files and photographs and audio tapes and postcards home and such, and I kept thinking I was going to finish it "tomorrow" for sure. It took 11 days to tell the story from start to finish. It continued to grow and evolve after that, but the whole arc was written in 11 days — with no concept whatsoever of ever writing such a book the morning I started it.

Talk about Kerouac on Record and the forthcoming On The Road with Cassadys.
Kerouac on Record is a scholarly exploration of Jack's connection to music — both the jazz of his time, and the rock artists who were inspired by him, like Bob Dylan, Van Morrison, Tom Waits, etc. I did a piece on 'The Grateful Dead: Jack Manifested As Music' — the most extensive exploration of the connection between the band and the Beats ever in print. They were the only rock band to have Jack or Neal sit in with them, and Cassady lived at their house and drove their bus, and every member of the band had read and was significantly influenced by On The Road before the group even formed. The Road adventure Kerouac captured in a car, and Merry Pranksters expanded to a bus — and the Dead turned it into a spaceship and took it "on the road" for 30 years. More people went "on the road" because of that band than any other entity in history — so that's some of why they were Jack manifested as music. On The Road With Cassadys is due out in Sept. I never knew Neal, but I was very close with his wife and life partner Carolyn, who was also the love of Jack's life, as I understanding it, and she was also the matriarch of the Beat Generation writ large. And I also became best friends with their only son, John Allen — named for Jack and Ginzy. We ended up having tons of Road Trips together. So there I was — a writer, in a car, going "on the road" with a Cassady (or two). So much has been written about Neal — and so little about these two, who were, in Carolyn's case, a tremendous intellect and well-read, and John was really fun and funny and always up for whatever crazy mission I came up with. For decades, I've wanted to capture them in book form, and now have finally done it.

You’re doing two book readings here in Cleveland. What do you plan to read/discuss?
I'll be bringing to life parts of The Hitchhiker's Guide to Jack Kerouac, How The Beats Begat The Pranksters, Kerouac On Record, On The Road With Cassadys plus some On The Road, Electric Kool-Aid Acid Test and gawd knows what all else. My shows are dynamic dramatic high-energy 'shows' not 'readings' — I bring the words to life in a sort of theater/comedy/improv/storytelling way. I've been doing this pretty regularly for 20-something years. You can hear original Merry Prankster George Walker describe his take on what I do here — I went to a lot of theater in my 27 years in Manhattan.  Also a lot of comedy clubs. You get spoiled living there. I sort of "grew up" seeing Dustin Hoffman and Malkovich and Denis Leary and Lewis Black on stages in small clubs or theaters — so it really drove home the idea of "killing" or "crushing it" as they say now. I mean, just slaying the audience. Commanding the stage. I saw it done by masters so many times. And it was like, you know, "Oh yeah — be that." Be engaging, be funny, go off-script, improvise, do different voices, be fast-paced, move around, change things up, don't do anything for too long. It's funny, but I think part of it also comes from the old TV variety shows where you might have a comedian followed by a magician followed by a singer followed by an animal act. So the audience never gets bored. That's what I try to do. I'm a one-man variety show.