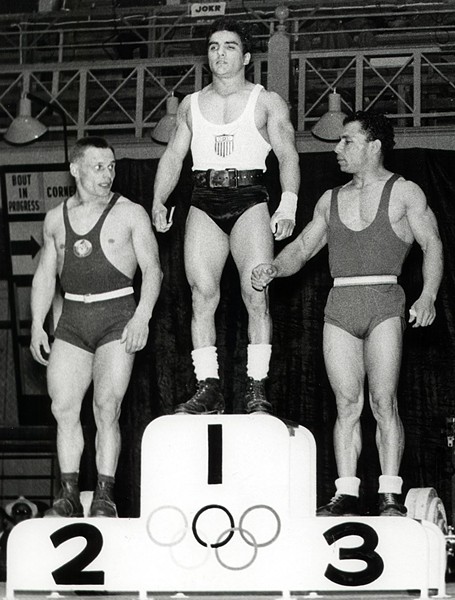 Chuck Vinci passed away yesterday at the age of 85. He's survived by eight children.

Vinci, born and raised in Cleveland, was one of the most successful American weightlifters in history. He won gold at the 1956 Olympic games in Melbourne and again in the 1960 games in Rome. No American male weightlifter has won gold since.

A 1988 Associated Press article that examined why Americans had an uphill climb in international weightlifting competitions detailed Vinci's unlikely rise in the sport.

Vinci's start in the sport is reminiscent of Charles Atlas, the proverbial 98-pound weakling who grew into a muscleman through diligent training.

At 4-foot 11 1/2-inches, Vinci grew up fighting turf battles in Cleveland, where he vied with other shoeshine boys for street corners on which to operate.

At 14, Vinci began pushing weights at the Central YMCA in Cleveland before meeting John Schubert, 66, who offered Vinci a full-time training opportunity.

"He came and lived with me for about seven months," said Schubert, an ex-Marine who has been working out with weights for 52 years and opened the Olympic Health Club on the city's west side after World War II ended.

"He lived in a back room of my gym and sometimes I'd come and check on the gym late at night and he'd be working out," Schubert said. "I'd tell him he had to rest some time."

Vinci remained an exercise and workout enthusiast well into his later years despite the normal wear and tear of aging, a heart surgery, and other health issues.

“I’m going to do it for the rest of my life,” Vinci told the Plain Dealer in 2012 after leaving a rehabilitation center. “I could pull 600 (pounds) out of that rack like it was nothing."

Funeral arrangements are still being made by the family.