Back in March, we reported on the imminent closure of Bac Asian Bistro (and forthcoming opening of Ninja City in Detroit Shoreway) and chef Anthony Scolaro’s plans to open Trio (2661 W. 14th St., 216-952-7035) in that corner Tremont property. Now we know that the restaurant will open on June 21.

For the past four years, Scolaro has been working to elevate the culinary scene in Medina, where he and his partners run the popular One Eleven Bistro (2736 Medina Rd., 330-952-1122). His goal when opening the business, he told me, was to bring a little taste of Cleveland to his hometown city. With Trio, a modern American bistro, the chef hopes to push his culinary game a little farther.

“When this opportunity in Tremont came up, it was kind of a way for us to do all the things that don’t necessarily fly down here,” he explains. “The opportunity kind of fell in our lap and we decided to take it and run with it. That’s the nature of this business in a way. Tremont is a mainstay and I think we can use that ‘new kid on the block’ thing for a while to hopefully get people interested.”

Management has spent the past few months spiffing up the interior, revamping the kitchen and reworking the space. 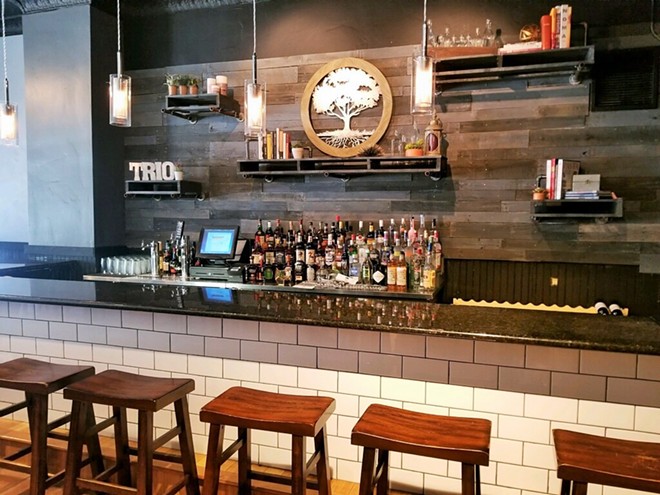 An early draft of the menu reveals seasonal, ingredient-driven items like roasted carrots with Romesco sauce and tarragon gremolata; rabbit rillettes with fig, apricot and giardiniera; a springy halibut with pea puree, asparagus and fingerlings; goat cheese agnolotti with peas, asparagus and lamb neck demi; and desserts like parsnip tiramisu made with mascarpone ice cream, coffee foam and shortbread.

When Trio opens it will be dinner-only Monday through Saturday.