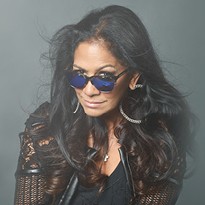 During a career that spans 30 years, Sheila E. has established herself as a talented percussionist who’s collaborated with acts such as George Duke, Marvin Gaye, Gloria Estefan and Prince. She’s also served as drummer in Ringo Starr’s All-Star Band and musical director for Jennifer Lopez, Beyonce Knowles and Prince.

On Aug. 16, she’ll perform a benefit concert at Hard Rock Live to support the Akron Urban League. The event will be the first in a series of events which will serve as the kickoff to the Urban League’s three-year sustainability campaign.

As the agency approaches its 100th anniversary, the campaign will aim to “ensure the organization’s future presence and growth in Summit County.”

“Sheila E. is an extraordinary performer and producer. We are excited to welcome her to Summit County and we’re sure that she will put on an amazing performance. I would also like to thank Hard Rock Rocksino Northfield Park and its President, Mark Birtha, for their generosity in hosting this event and their donation of all ticket proceeds to support the Akron Urban League,” says Urban League President and CEO Dr. Sadie M. Winlock in a press release.

Tickets to the Sheila E. performance are currently on sale at ticketmaster.com or at the Rocksino Box Office. For a limited time only, ticket packages to the entire Urban League Sustainability Campaign Kickoff Weekend, which include a mid-tier ticket to the Sheila E benefit concert, one ticket to the Urban League’s 93rd Annual Gala and Academy of Leader’s Induction Ceremony featuring entertainment by Eddie Levert & the Eddie Levert Review and one ticket to the Urban Gospel Concert hosted by the House of the Lord Church featuring entertainment by Geoffrey Golden, are on sale too.

Ticket packages are priced at $200 per person, and they can be purchased at akronurbanleague.org until June 30.