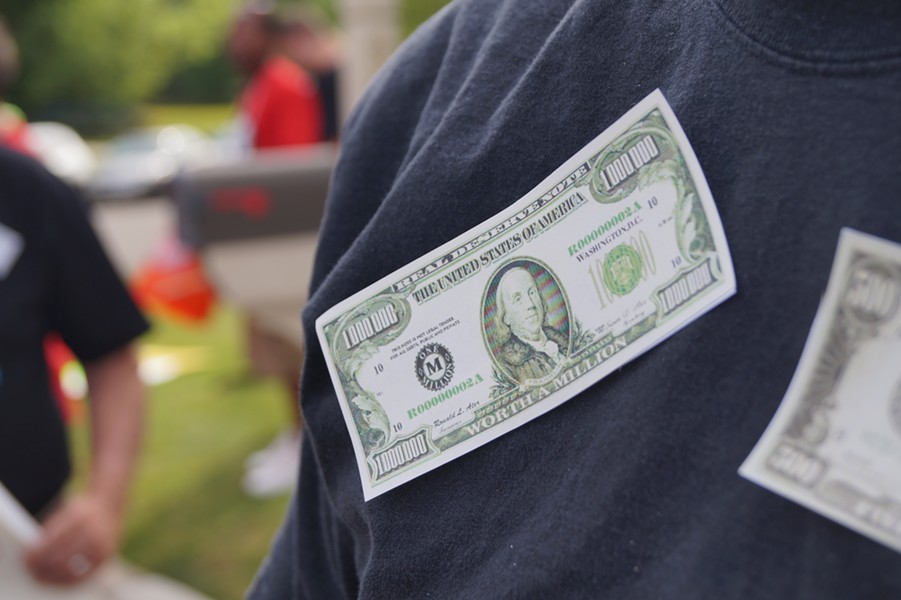 After presenting the recommendations contained within a new report Tuesday morning, Policy Matters Ohio researcher director (and the report's lead author) Zach Schiller was asked whether or not Ohio, a "center-right state," would realistically support a tax code overhaul that proposed taxing Ohio's wealthiest at a higher rate.

"In the past," Schiller said. "People have been very interested and very supportive of the idea that we should have taxes on people who can afford to pay them. I don't accept the notion that this is somehow a minority view, or necessarily unpopular... If you look at the tax cuts [since 2005], it's really a flabbergasting amount. The scale of this is really quite substantial."

Since those cuts in 2005, Schiller said, Ohio's economy has lagged behind the nation in key economic indicators, including job and wage growth. (Attorney Jon Pinney, who spoke at the City Club earlier this month, lamented many of the same economic outcomes, though didn't address the state's tax code directly.)

Parallel to the income tax cuts have been drastic cuts to local budgets and critical services that Ohio's poorest residents rely upon, like public education and public transit. Among the more shocking statistics included in the Policy Matter report was the fact that Ohio now ranks dead last (50th among 50 states) in support of Children's Services.

"The dramatic tax cuts have weakened the state’s ability to meet these and other needs and created an upside-down system that causes those near the bottom of the income scale to pay nearly twice the share of their income in state and local taxes as the top 1 percent," the report says.

In order to correct the slant toward Ohio's most affluent residents and to help create a more "prosperous and equitable" Ohio, the report calls for four key reforms.

1) Restoring a 7.5 percent state income tax to Ohioans making more than $218,000 per year (currently the top income bracket). The current tax rate for this group is just below 5  percent, but the proposal wants to restore the level passed in 1992 by then-Governor George Voinovich.

2) Creating a new income bracket for the very top earners, those making more than $500,000 per year. In the proposal, income over that level would be taxed at 8.5 percent. Ohio's graduated tax structure means that the highest rate only applies to income over the highest threshold.

3) Repealing a tax loophole passed in 2013 that stipulates that owners of limited liability corporations (LLCs) don't have to pay taxes on their first $250,000 in profits. Anything above that threshold is taxed at 3 percent. This provision was passed with promises that new firms and new jobs would be created in its wake, but Policy Matters' analysis shows that first-time hires have been flat since the tax passed in 2013. The "vast majority" of those receiving the break get less than $1,000 per year, nowhere near enough to hire additional employees. As with other recent tax reforms, the report finds, the benefits have been enjoyed disproportionately by those at the top.

"The Ohio General Assembly needs to throw this loophole on the scrap heap," Schiller said.

4) Expanding the Earned Income Tax Credit (EITC), by removing its cap and making it refundable to increase the amount eligible claimants may receive.

All told, these reforms would net the state roughly $2.6 billion, Policy Matters estimates, using modeling from the Institute on Taxation and Economic Policy (ITEP), and is primarily focused on the income tax — "the only major tax based on the ability to pay." This increased revenue would allow the state to make investments in education, human services and local governments.

Schiller and Wendy Patton, the report's co-author, noted that increased revenue at the state level will become increasingly important as national revenues decline, thanks to the enormous tax cuts for corporations and the wealthy at the Federal level. As those revenues decline further (an estimated $1.5 trillion in the next decade), there will be political pressure to cut social programs. This is the prototypical Republican model, in other words, and it's working swimmingly.

THE TRANSIT ANGLE:
Mark Donaghy, the Chief Executive Officer for the Greater Dayton Regional Transit Authority, spoke on a conference call about the tax proposal Tuesday morning. He discussed the effects of reduced state funding for public transit, a topic Clevelanders are exceedingly familiar with.

Donaghy said that due to the loss of the MCO sales tax (a loss of roughly $4.5 million per year), the Dayton system was forced to cut service and raise fares in February.

The service cuts were significant, he said, and included the elimination of fixed-route bus service to Wright Patterson Air Force Base and "critical weekend service." Overall, the Dayton system now has 25 percent less service than when Donaghy arrived 12 years ago.

"Most of the pushback we're getting now is that a lot of the entry level jobs have weekend schedules," Donaghy said. "Two-thirds of transit passengers statewide are riding buses and trains to access jobs, which are often entry-level... Without our services, our customers would lose their jobs and regional employers would face shortages of manpower that would be devastating. We are a vital link for those wishing to better themselves and to Ohio employers wishing to build our economy."

"It's certainly not our preference to have to continually look to local sources to assume more and more of the burden," he said. "And we haven't taken a position yet. But at some point, we feel like we're in one of these positions where if we don't seek a revenue increase, it's going to be death by 1,000 cuts.

"The story is worse," Donaghy concluded, "in Cleveland."

MOVING FORWARD
Schiller said that Policy Matters Ohio had not yet approached state legislators about their proposal but that they have contacted the gubernatorial campaigns in hopes that the report "gets some consideration."

When asked whether or not Ohio's stagnant economic performance might be attributed to other factors, Schiller said it was important to look at long-term data.

"The fact is there can be ups and downs in a few months or a given year," he said. "But what we've seen consistently is that Ohio has badly underperformed the nation. Badly. It's not even a contest. Ohio has been lagging and is expected to continue to lag. To suggest that somehow that current tax policy has contributed to good wages or more jobs or economic growth is simply incorrect."