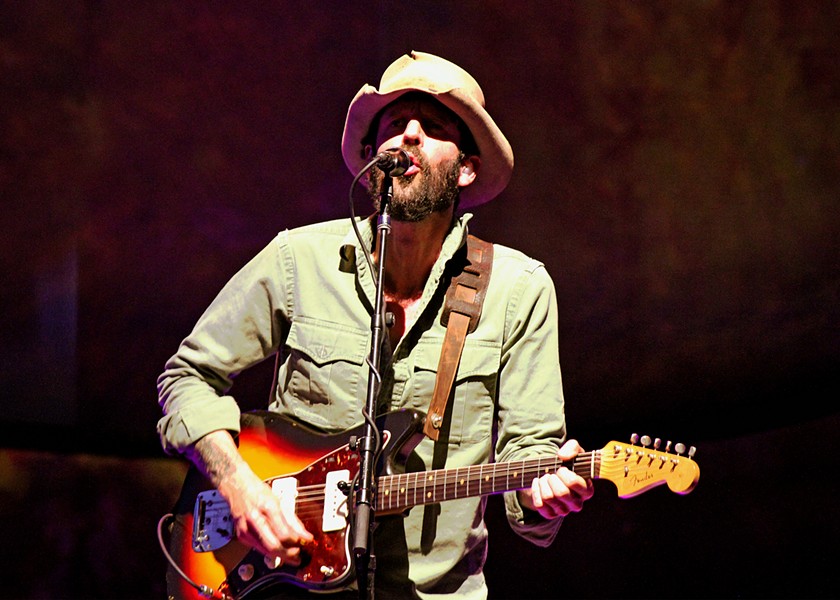 There are concerts you stand for and ones you sit for. Singer-songwriter Ray LaMontagne is the kind you sit for. Not that there’s anything wrong with that.

For nearly two hours last night at Jacobs Pavilion at Nautica, LaMontagne performed a subdued set that drew heavily from his latest album, Part of the Light.

Wearing a ragged cowboy hat and jeans (he owns a farm, so he can pull it off), LaMontagne ignored his more popular tunes like “Jolene,” “Trouble” and “Supernova.” And yet, with the backing of his fine four-piece band, he still managed to deliver an engaging set that had a quiet intensity to it (he’s said in interviews that some of the songs on Part of the Light reference the current political climate) in front of a respectful crowd that filled about three-fourths of the venue.

You can see a slideshow of photos from the concert, which also featured opening act Neko Case.

Many of the tunes from last night’s show had a real ‘60s vibe to them. With its acoustic guitars and hushed vocals, the folk ballad “To the Sea,” one of many tunes from Part of the Light that made the set list, came off as something that Donovan might have written and performed, and with its slide guitar and acoustic guitar melody, “Opal” possessed an old school country feel and seemed like it could have come from another era too.

During a particularly fierce rendition of “No Answer Arrives,” a song that benefited from a heavy organ riff, LaMontagne amped up the trippy visual images (kaleidoscope-like swirls of colorful patterns) that played throughout the night on three round-ish video screens that flanked the stage, and LaMontagne again cranked up the guitars for "As Black as Blood Is Blue," a song that built to a compelling climax thanks to a Black Sabbath-like guitar riff and pounding drums.

LaMontagne began the Stones-y “Such a Simple Thing,” on acoustic guitar and let the band slowly join in. It made the live rendition of the song a bit more potent. “She’s the One” sounded more intense too as LaMontagne practically screeched his way through the tune, and he again drew from the ‘60s for “Paper Man,” a tune that had the cadence of an old song by the Who.

A psychedelic dirge that sounded like a Pink Floyd tune, “A Murmuration of Starlings” gave way to “Goodbye Blue Sky,” a track that ended with an epic jam that closed the set. LaMontagne returned to deliver a four-song encore that included the hard rocking "Hey, No Pressure," a song driven by a simmering blues guitar riff. It was at this point that many patrons rose to their feet to show their appreciation for the soft-spoken singer-songwriter who politely thanked fans for coming to the gig.

He's a real class act, and his fans seem to acknowledge and understand that he enjoys performing live even if he doesn't offer much in the way of banter.

Alt-country singer-songwriter Neko Case opened with a 40-minute set that adroitly veered from tender ballads to power-pop anthems. Her five-piece band nicely complimented her powerful voice, and she capably switched from tambourine to electric and acoustic guitar during her performance.