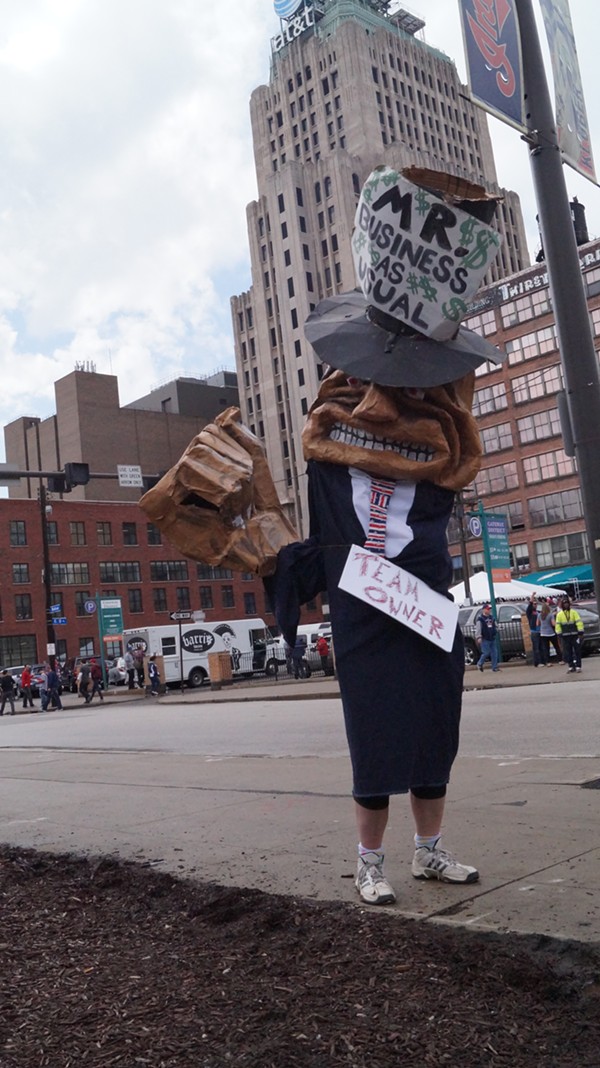 A few days before Cleveland City Council President Kevin Kelley rejected more than 20,000 signatures seeking a referendum on the Q Deal in 2017, the executive director of the Gateway Economic Development Corporation, the nonprofit organization that owns and leases the Quicken Loans Arena and Progressive Field on behalf of taxpayers, announced that the Sin Tax well was nearly dry.

"Projects may not go forward unless [the teams] self-fund them," Todd Greathouse said on May 17, noting that there was only about $1.5 million in funds on hand.

That was a problem, and a grim portent.

The Sin Tax was renewed in 2014 after an aggressive propaganda campaign waged by the Cleveland pro teams and their business allies — "Keep Cleveland Strong" — and now brings in between $13 million and $15 million each year from a tax on cigarettes and alcohol. But that revenue stream is nowhere near enough to pay for the extravagant projected capital projects, on top of required maintenance to HVAC and electrical systems, that the teams continue to itemize.

The City of Cleveland and Cuyahoga County agreed to evenly split the Sin Tax revenue equally among the three pro sports facilities: the two leased by Gateway, and First Energy Stadium, home of the lowly Browns, which is owned by the city. Based on conservative estimates of the total sin tax revenue, each facility would be in line to receive about $86.6 million for capital repairs over the 20-year life of the tax (2015-2035). Taxpayers are responsible for all capital repairs that cost more than $500,000, per the lease agreements, and projects at the Q and Progressive Field must be approved by Gateway and then by County Council.

(In one of the more brazen lies by the Cavs during the Q Deal deliberations, Cavs/Quicken Loans Arena CEO Len Komorowski asserted that the team had paid for "all operating, maintenance, repair, and capital expenses" at the arena for the duration of its operating life.)

The teams have been spending their Sin Tax allotments so quickly that funding for necessary maintenance will dry up long before the Sin Tax comes up for renewal once again. And given the county's maxed-out credit card, not to mention the audacious repurposing of revenue streams (a portion of the hotel bed tax, a portion of the Q admissions tax) to finance the unrelated Q Deal, there simply won't be many available options to fund stadium repairs down the road.

To pay for projects from 2015-2017, the County borrowed $60 million in bonds as an advance on future Sin Tax revenue. Now, about $7 million per year must be allocated to pay down principal and interest on those bonds.

Will Tarter has been attending the Gateway board meetings as a concerned private citizen. He told Scene that he is often the only member of the public in attendance. He compiled data for a report on the funding nightmare that awaits local taxpayers due to the teams' imprudent spending. (You can read Tarter's report below.)

The Cavaliers, for example, spent $23 million over the course of the Sin Tax's first two years, including more than $9 million for a new scoreboard, $4.6 million for a "video production control room," and $4 million to replace the roof. An additional $11 million in projects, including a $3.5-million "telescopic seating platform," have been approved by Gateway but are yet to be approved by County Council.

In 2016, the Cavs submitted their five-year capital cost projections, which included $17.7 million for a total overhaul of the HVAC systems. (An update by the Cavs at the most recent Gateway board meeting on May 23 adjusted those HVAC costs upward by $5 million.) This means, per Tarter's estimates, that if all projects are approved, the Cavs will have used up $71 million of their ~$86.6 million in available Sin Tax dollars in only the first seven years of the tax's 20-year life.

The situation at Progressive Field, Tarter notes, "is even worse."

The Indians currently have used $37 million of their allotment, including more than $16 million for a new scoreboard, with an additional $1.1 million for suite renovations, pending county approval.

The five-year capital cost projections that the Indians submitted in 2016 included more than $47 million in projects, before the addition of soft costs, including $12 million for food service equipment and $8.5 million to replace the stadium's seating.

That alone would already put the Indians at the threshold of their $86.6 million estimated Sin Tax allotment. But last month, the Tribe came knocking once again, asking for $2 million to renovate the ticket booths — too many windows! — and to expand or restructure the team's administrative offices to accommodate more employees; plus $6 million to renovate the ballpark's Club level, including new conceptualizations of all dining areas.

The money for these projects simply does not exist, and won't. And both Gateway and County Council need to draw a line in the sand regarding the sorts of projects they're willing to approve. Dollars spent on enlivening restaurants or restructuring office space should absolutely be the prerogative of the facilities' tenants.

The Indians, however, have a lease that expires in 2023. They're wise — from the soulless vantage point of billionaire owners — to bleed the county dry and get every last dollar available in order to maximize the franchise's value on the private market, should negotiations for a lease extension go south.

What's infuriating is that the public is indeed on the hook for capital projects over $500,000 at these facilities. But with more scrutiny and independent assessment — are the stadium seats really in bad shape, for example? Or are they just no longer 'state of the art'? — the sin tax should be an ample pot.

The Q Deal, on the other hand, was not required in any lease. And its blind support from the vast majority of our local elected leaders was a scandal of recklessness and shortsightedness long before it became an abortion of democracy.

The understated county councilman Dale Miller mentioned his concern at a Q Deal hearing in 2017.

“I'm worried about putting aside funding for reserves [to cover Q Deal shortfalls]," he said, "if we can't afford to pay for basic maintenance."