The U.S. Department of Health and Human Services' Office of Inspector General recently released a report showing that despite categorizing the opioid crisis as a public health emergency, Ohio doctors are still overprescribing opioids.

In looking at opioid prescriptions for Medicaid participants in Ohio between June of 2016 and May of 2017, nearly one in six beneficiaries in Ohio received at least one opioid through Medicaid. Sixteen percent of beneficiaries — 539,810 of the nearly 3.5 million enrolled in Ohio Medicaid — received opioids.

Hydrocodone-acetaminophen (brand name Vicodin), was the opioid most commonly prescribed to children. The study does cite research showing that even using prescription opioids for legitimate purposes before high school
graduation is associated with increased risk of future opioid misuse.

Fortunately, the study also showed that only 231 people were bouncing between multiple doctors, aka "doctor shopping," seeking prescriptions for opioids.

However, one beneficiary received 59 prescriptions in that 11-month time period, more than 12 times the level that Centers for Disease Control recommends avoiding.

Nearly 50 prescribers stood out by ordering opioids for more beneficiaries at
serious risk than their peers, with one-third of these prescribers located in Franklin and Cuyahoga County. The inspector general believes that these prescribers may not have followed all of Ohio’s guidelines and regulations. 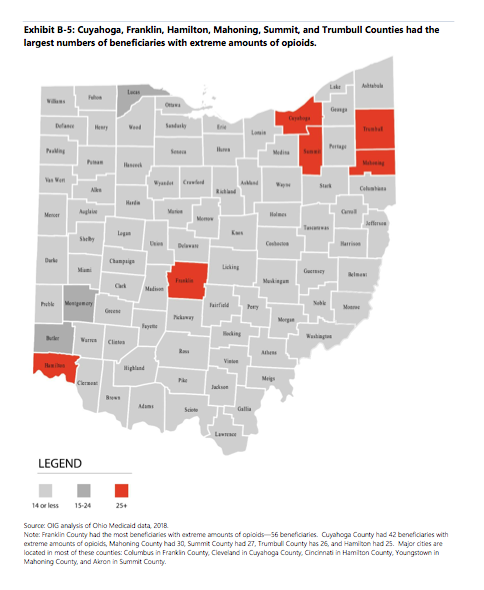 In 2016, more than 100 Americans died each day from opioid-related drug overdoses, according to a report from the Centers for Disease Control and Prevention. Ohio had the second-highest number of overdose-related deaths in the nation, with 79 people dying from opioid overdoses every day.

It's staggering just how much research is being done regarding the opioid crisis compared to the crack epidemic that hit America in the 1980s, when the "War on Drugs" was fought with mass incarceration of people of color. Today, the opioid epidemic (which disproportionally affects white people) is given a more sympathetic approach emphasizing education and prevention.

Now that we're halfway through 2018, it will be fascinating to see what the numbers reveal for next year's study. Hopefully, there will be signs of improvement given the Health Policy Institute of Ohio's new addiction scorecard showed Ohio has implemented many evidence-based programs, reduced the number of opioid prescriptions dispensed and increased health insurance coverage and treatment access.

Whether or not these reduced number of prescriptions have also reduced the dosage levels has yet to be seen. This study also concluded before the nearly 400 lawsuits filed against opioid manufacturers by cities, counties, states and Native American tribes together under Multi-District Litigation were dropped into the lap of federal judge Dan Polster in Cleveland.

Regardless, if the data from 2016-2017 can tell us anything, it's that we've still got a hell of a long way to go in the fight against the opioid crisis.