Ohio Has The Highest Number of 'Hot Car' Related Deaths in the Northern Continental U.S.

An unthinkable tragedy occurred this weekend in Medina after a six-month old baby girl died after she was accidentally left in a car during a baseball tournament. Authorities responded around 2:15 p.m. to Ray Mellert Park, and the child was taken to Cleveland Clinic Medina Hospital, where efforts to revive her were unsuccessful. According to the National Weather Service, the temperature was 90 degrees with a heat index of 93 just before 2 p.m.

Pending results of the child's autopsy, this would mark the 25th confirmed pediatric vehicular heatstroke death in the country this year. According to www.noheatstroke.org, an advocacy website run by the Department of Meteorology and Climate Science at San Jose State University, an average of 37 kids die annually from being left in hot cars nationwide.

Temperatures as low as 60 degrees can be risky for children, especially those under the age 5 who are constrained to a car seat because their bodies heat up three to fives times faster than adults.

The lack of airflow and metal body of a car essentially turns the vehicle into an oven, and cars on average, heat up 10 to 20 degrees every 10 minutes. By the time the car reaches 104 degrees, children start to become ill. Heatstroke occurs, on average, at 107 degrees.

It may seem impossible for a parent to forget their child or a pet in their vehicle on a hot day, but the reality is that it's far more common than one would think, and it impacts people across all socio-economic classes, gender identities, mental capabilities, religions and ethnicities.

In 2009, The Washington Post detailed as much in an incredible story — "Fatal Distraction: Forgetting a Child in the Backseat of a Car Is a Horrifying Mistake. Is It a Crime?" In it, the paper examined the factors that lead to hot car related deaths, interviewed parents that made the most horrendous mistake of their entire lives, and talked with academic professionals who study how this can happen.

David Diamond, professor of molecular physiology at the University of South Florida and an expert on memory studies, explained to the Washington Post,  “Memory is a machine, and it is not flawless. Our conscious mind prioritizes things by importance, but on a cellular level, our memory does not. If you’re capable of forgetting your cellphone, you are potentially capable of forgetting your child.” 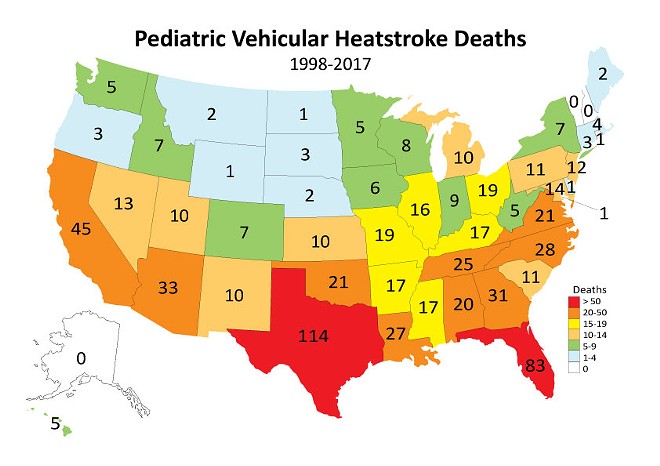 Compared to other states above the Mason-Dixon line, Ohio experiences an abnormally high number of deaths given we experience weather above 60 degrees for only a few months out of the year. Of all northern continental U.S. states, Ohio has the highest number of hot-car related deaths. Illinois comes behind in second place, but given Illinois has much higher population than Ohio, we sit at a death rate of 8.8 per 1 million people compared to their 6.6.

Ohio is one of 29 states that does not have a law specifically against leaving a child unattended in a vehicle, but injuries and deaths can be prosecuted under child endangerment, manslaughter and homicide statutes.

Yes, there are those terrible and neglectful people that choose to use a locked car as a babysitter and should absolutely be prosecuted to the fullest extent of the law, but many of these unfortunate deaths are the result of human error, and ones that can be prevented.

Non-profit advocacy group Kids and Cars works diligently to offer as many resources as possible to prevent car related fatalities of children. According to their painfully depressing database, hot cars are responsible for the second highest number of car-related deaths in children, behind only instances of backovers—when a driver cannot see the child while backing up.

Kids and Cars also has a helpful acronym to remind parents to always check on their kids, something they call the "ACT."
42 children died in hot-car related deaths last year and a report from the National Safety Council released in June gave Ohio a "D" rating in safety. There are safety alarm systems available to help remind parents about their backseat children, and Kids and Cars is actively pushing for legislation requiring vehicles to add backseat notice features.

As the weather continues to rise, prevent hot-car related deaths and take the time to look before you lock.