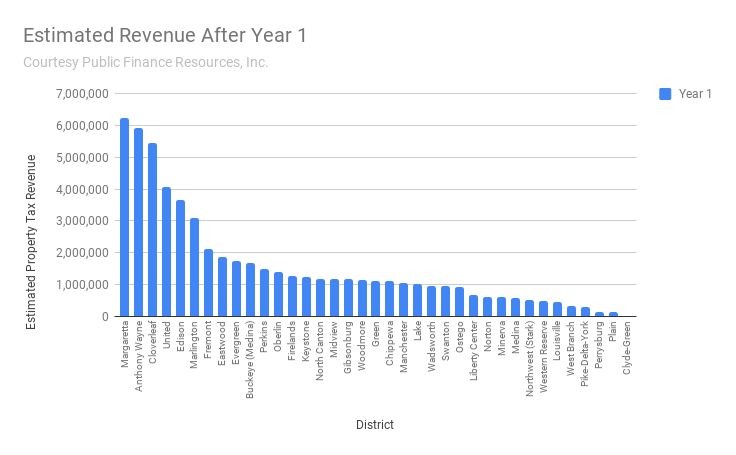 COLUMBUS, Ohio - Uncertainty and confusion abound among Northern Ohio school districts, which are awaiting a promised funding windfall from the Nexus pipeline tentatively scheduled for completion late this year.

Beginning in the 2019-20 school year, 37 Ohio school districts are expecting to receive nearly $57.7 million in new property tax revenues from the Nexus pipeline. However, some districts are waiting to see how the state's formula for school funding will affect the anticipated "windfall," and if the estimates of the tax amounts are accurate.

"We haven't even discussed, if you can believe it or not, what we would do with these funds," said Kerri Johnson, treasurer of Lucas County's Anthony Wayne Local Schools. "We kind of have a policy that is: Until we receive the money, we don't put it in our budget. We don't count on it."

A media spokesperson for Nexus Gas Transmission, Adam Parker, did not return requests for an interview, but said in an email that the tax value estimates are based on "ad valorem taxes" in Ohio, which are taxes based on the value of items such as real estate or personal property. "The tax is largely based on the value of pipeline in each taxing district," he said.

Anthony Wayne is one of the districts expecting to get revenue from the pipeline, which is an ongoing project that will transport natural gas from eastern Ohio to southeastern Michigan. Public Finance Resources, Inc. (PFR), a financial analysis group, compiled estimates for Nexus Gas Transmission on the total revenues for the districts.

According to PFR's data, Anthony Wayne schools are scheduled to receive about $5.9 million in revenue the first year after the pipeline's completion, which is the second-highest amount on the list of schools.

The school district projected to receive the most from the pipeline is Margaretta Local Schools near Sandusky, which is estimated to receive about $6.2 million. Superintendent Dennis Mock said that while the pipeline could increase school funding based on property taxes, the Ohio Department of Education (ODE) will likely decrease the funding their districts regularly receive from the state.

"All the talk is ... we might gain in one area, but we're going to lose in the other," Mock said. "Our valuation of property will be most likely increased, which will reduce our funding from the state."

Some districts are concerned their state funding will be cut because of the pipeline revenue and result in no actual net increase.

"In some districts, it's probably going to be a wash," said Jon Strong, co-founder of the Coalition to Reroute Nexus (CoRN) and a homeowner whose land is affected by pipeline construction. He added that ODE funding for school districts strongly considers their ability to collect property tax. The more funding they can raise on their own, the less money they're likely to get from the state. "And the [schools], I would think, [that] are going to make out are the poorer districts that get a lot of money from Nexus."

Strong said he gathered information for four years about Nexus from county executives and ODE officials. He said he initially opposed pipeline construction, not for environmental or financial reasons but as a private landowner.

"This is a violation of property rights," he said, "and the route choice was just insane."

The environmental group No NEXUS Pipeline details potential safety hazards from the construction of compressor stations on its website, nopipelies.org. It warns cities near the Seville station, such as Medina and Wadsworth, of potential "contamination to soils, waterways and, most importantly, health issues."

Despite the safety concerns about the nearby compressor station, Wadsworth Local Schools Treasurer Doug Beeman said he is excited for the eventual revenue gains. "From my position as a treasurer," he said, "it's going to be a great windfall for schools in our community."

Beeman added that his district, like Anthony Wayne, will wait to budget the money.

"I haven't put those exact numbers into the [five-year] forecast," he said. "I don't want to give my Board of Education and my community a false sense of security that this money is coming when there's ... some questions about it."

Beeman said county executives are skeptical about what could be overestimated numbers from PFR, the company that analyzed the finances for Nexus. He still is confident the district will receive some funding.

"How much it's going to be and when it's going to be are more the questions - not if or if not we're going to get it," he said. The money would likely be added to the district's reserves to hold off the need for a future levy.

Similarly, Kerri Johnson from Anthony Wayne Local Schools said she would consider using money from the pipeline to reduce what taxpayers are paying each year. She said initially, she was frustrated when those numbers were released, as her district had just put a $44 million bond levy on the ballot for a building project. The levy ended up passing.

The pipeline money "would definitely keep the school from going for new levies," she said.

Mock, Margaretta's superintendent, said he is preparing to hold community meetings to discuss how potentially more than $6.2 million from the pipeline could be spent.

"If that [estimate] is accurate," he said, "it's our hope that we can use the funds to build new buildings."

Mock added some school buildings in the district are more than 100 years old, and that the middle and elementary schools are combined. "If we can get new buildings without going to the voters, that is pretty exciting news for our community," he said.

Melissa Baker, treasurer of United Local Schools in Columbiana County, said her district also would plan to use the potential revenue gains from the pipeline to replace aging buildings.

"It would be a game-changer for us," she said.

United Local is projected to receive more than $4 million in property tax revenue after completion of the pipeline. Baker said United, like many Ohio schools, recently lost significant funding, including $150,000 from state foundation funding and $100,000 from federal title money. She said United would use the surplus of money from the pipeline to build a new school, just as the Margaretta district plans to do.

At this point, school districts set to receive funds will have to work with the estimated numbers, as the money will not be available until spring 2020. According to Parker's email, the pipeline is expected to be completed in the third quarter of this year.

"I'm sure as time gets closer and the reality of the revenue becomes an issue, yes, those conversations will take place," Johnson said. "We're going to deal with all of that when the time comes."