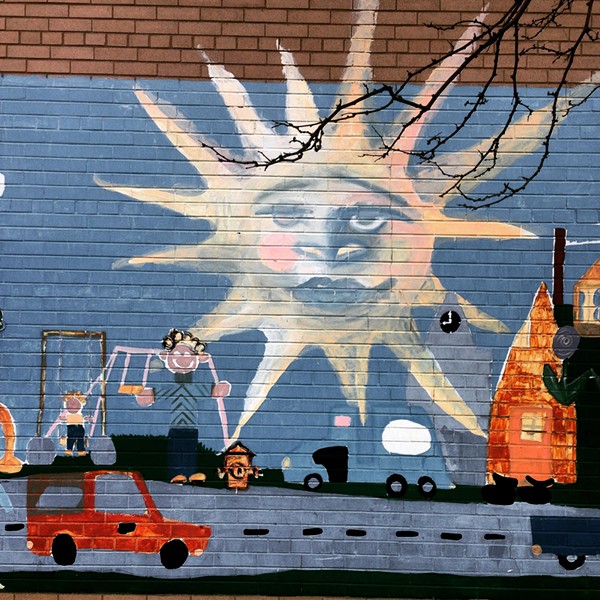 The New York Times recently reported on "A Color Removed," the exhibit at SPACES Gallery as part of the FRONT Triennial, in an article by Jillian Steinhauer.

The article gets much of the history wrong, and although the Times and Steinhauer were contacted for corrections, no change to the record occurred. The inaccurate—and in a certain light, fabricated—recounting of the project weakens its aim to show how community can confront injustice in Cleveland across color lines.

"A Color Removed" is a participatory art project. It asks Clevelanders to remove select orange objects from our lives while thinking about who has and who does not have protection and safety. Removing orange comes from the absurd claim that Tamir Rice was shot because the orange safety tip of his toy gun had been removed. The objects are donated through bins around the city and recollected, along with notes explaining them, in the exhibit at SPACES. Over time, the room builds up with thoughts about safety, social justice, and the meaning of color. As you enter SPACES, the first stop is the works of four African-American art makers, (one a collective), from Cleveland.

"A Color Removed" developed from an invitation to artist Michael Rakowitz to give the 2015 Beamer-Schneider Lecture in Ethics & Civics at Case Western Reserve University. In trips to Chicago as early as 2013, Rakowitz was asked to turn a lecture into a proposal for the community to do something through an art project. He responded by asking for everything he could be sent about what is going on in Cleveland with respect to social justice. Eventually, he settled into listening to reports of the Ethics Table’s 2014-2015 discussions of police brutality.

The Ethics Table is a lunchtime community discussion group in University Circle open to anyone. At one meeting, a relative of the family of Tamir Rice broke down in grief. Rakowitz heard of this, was moved, and responded with "A Color Removed."

The Beamer-Schneider Professorship, which funds the Ethics Table to provide a forum for thought and learning outside Ivory Tower norms, then introduced Rakowitz to SPACES, Zygote Press, Guide to Kulchur, and the Social Justice Institute. In 2016, the Professorship organized a call with SPACES, multimedia artist Elaine Hullihen and Rakowitz, which is when the project began to move onto SPACES and to FRONT, where it might be funded further. This is a story of inter-institutional collaboration happening in Cleveland, following community discussion.

Here, though, is where the inaccuracies begin. The Times reported that the project was “dormant” until SPACES and FRONT “revived” it. But it was not sleeping or dead. To imply it was is to draw hard work up from a community to a star-studded and exclusive art world, just as corporate managers do. On the contrary, the project was deliberately withheld because the Rice family had not been reached further and because the possibility of a trial of Timothy Loehmann was not resolved.

An art project should be helpful to a family in grief and useful to a city, not a vain spectacle. Much thought was given, public reflections written, phone calls placed, and organizations explored from 2013-2018 until the art project could be realized with the support of the Rice family. The whole thing was a sustained intention over five years by many different people and institutions, beginning with the wish to do philosophy aesthetically and in the community for the sake of social justice, responding to where our community actually is.

It is good that the article focuses on prominent and emerging African-American art-makers in Cleveland, and on Ms. Rice's relentless pursuit of justice, restoration, and empowerment. African-American artists and Ms. Rice deserve to be seen and heard in this city. But the article left out the many other people and institutions that helped shape the project and try to be there for this injustice that struck the Rice family and Cleveland. It minimized community across color lines.

I was especially disappointed that the intellectual and emotional labor of everyday people participating in The Ethics Table and The Moral Inquiries were not noted alongside the work of the African-American artists in the exhibition. Ironically, in the exhibit, there is a table just like the one from the Cleveland Room in CWRU’s Thwing Hall where The Ethics Table met in 2015. Making an accurate account would have been more aesthetically precise and, more importantly, a truer and richer story of this city in its struggle for justice across color lines.

The Tamir Rice Foundation will open as a nonprofit center to support the arts and education for underserved afro-centric youth in Cleveland. Please consider supporting it or the causes and reform that it supports.

Jeremy Bendik-Keymer is the Beamer-Schneider Professor in Ethics at Case Western Reserve University.