Lorain is Basically Pawnee, At Least When It Comes to Raccoons 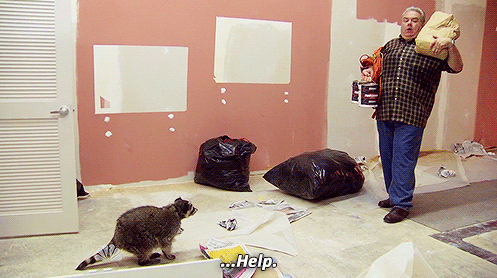 The New York Times has a good deep dive this morning on how the state of Ohio has squirreled away some $2.7 billion in its Rainy Day fund, with another $634 million to be added from this year's budget surplus, while it continues to cut funds to cities that are struggling to pay the bills. It focuses on, among other cities, Lorain, where Mayor Chase Ritenaeur gave the reporter a tour that included a busted police car they can't fix and traffic signals that are only working thanks to repairs made with parts from discarded lights.

He also noted, "The raccoon problem is under control. They have their part of the town and we have ours."

Not really. That's a Leslie Knope quote from Parks and Rec, of course. But it's surprisingly not far off from reality in Lorain.

"This city of 63,000 is in such dire financial straits that it has ceded part of an administrative building to raccoons; repeatedly calling the exterminator was too costly," the Times reported.

Which is all fun and disturbing but if it gets you to read the piece that's all that matters.

Rainy Day funds across the country have been used in a variety of ways with a mixed bag of success and failure. When John Kasich took office in 2011, you probably know, because he's told you 982 times, the state's Rainy Day fund had just 89 cents.

“We were way in the hole,” he told the paper. “And I look at the breadth and the depth and the scale of the change, and it’s stunning to me.”

Meanwhile, cities around Ohio are struggling to provide sufficient police staffing, adequate and timely road repairs, or proper funding for public transit and other services.

While saving is prudent, mayors and other reps have vocally questioned the wisdom of a fund that size continuing to grow while local pocketbooks are squeezed. The state's Local Government Fund, for instance, passed down $674 million in 2007 compared to $349 million in 2017.

“Reasonable people can disagree on the best use of Ohio’s rainy day fund,” the Ohio Mayors Alliance told the Times. “However, as a bipartisan coalition of mayors, we find it unfortunate that Gov. Kasich doesn’t see the value of Ohio’s cities and small towns.”