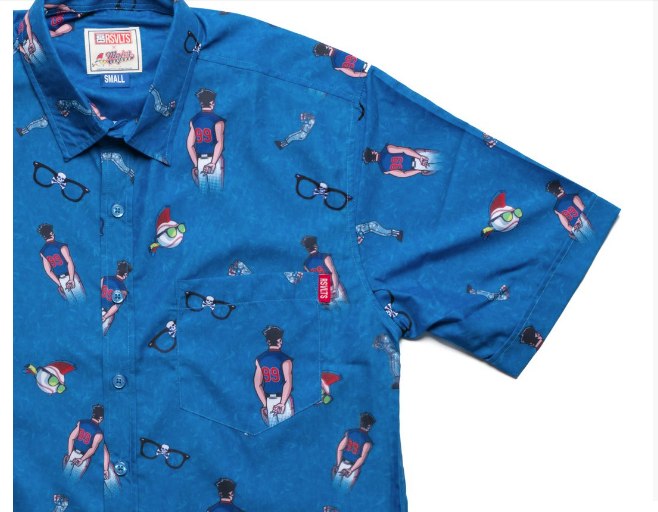 With the exception of officially licensed professional sports apparel, it's usually pretty difficult to find CLE-centric clothing outside of our local T-shirt companies like CLE Clothing Co., Kay-Em Apparel and Fresh Brewed Tees (just to name a few).

The rest of the world doesn't appreciate or glorify Cleveland they way they do Chicago, New York or Los Angeles, so whenever someone does shine a light on the incredible cultural contributions The Land has made, it's a cause for celebration.

The Roosevelts (commonly referred to as RSVLTS) Clothing Company first gained popularity with a collection of button-ups and t-shirts celebrating the baseball classic The Sandlot. The ability for people to walk into a business-casual situation with a dreambabe Wendy Peppercorn pattern was undeniably popular. In the wake of the line's success, RSVLTS has introduced another baseball classic, with an officially licensed line of apparel in honor of Major League.

Major League is perhaps the most iconic "Cleveland" film of all time, debuting at No. 1 at the box office and currently boasting an 82 percent "fresh" rating on review website Rotten Tomatoes. The American Film Institute named it as one of the Top 10 Sports Movies of all time in 2008.

In addition to the classy "Wild Thing" button up, as shown in the photo above, RSVLTS has also nabbed the licensing rights to an official Jobu T-Shirt, so you can remind everyone of the dangers of stealing Jobu's rum. The famous Hawk-Ball Indians' logo from the film is also emblazoned across a T-shirt, as is an official 'Wild Thing' tee.

Unfortunately, the killer embroidered hats of the Hawk-Ball and Jobu are currently out of stock, but would make excellent replacements for Chief Wahoo ball caps.

Check out the RSVLTS website for all of the Major League apparel as well as their other lines featuring Rookie of the Year, Rocky, Bob Ross and The Sandlot.