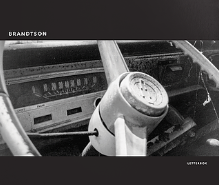 Last year, Steadfast Records reissued the sophomore effort from local rockers Brandtson, a group that played regularly around town in the '90s.

Steadfast has just announced that it'll now reissue Letterbox, the band's 1997 debut, which will be available for the first time ever on vinyl and cassette.

Housed in a gatefold jacket, the reissue will feature restored and expanded artwork from the original Steadfast Records release. It arrives on April 12, but preorders are currently being taken.

Original Post: A locally based band from the ‘90s, the emo-punk act Brandtson will reissue its sophomore album, Fallen Star Collection on Oct. 31 via Steadfast Records. Originally released on Deep Elm Records in 1999, the album has found a new home on the relaunched independent label operated by the band’s Matt Traxler.

To celebrate the album’s 20th anniversary, Steadfast Records will make the album available on vinyl for the first time in a limited edition that comes with a bonus CD that includes 10 previously unreleased demos as well as a 36-page lyric and a book consisting of photos from the era. Additionally, the album will be issued on limited edition cassette. The label is currently accepting preorders.

The reissue campaign will also include T-shirts, enamel pins and slip mats.