Rate of Teen Attempted Suicide Across Cuyahoga County Isn't as High as CMSD's, but Still Shocking

New data from the Prevention Research Center (PRS) for Healthy Neighborhoods at Case Western Reserve University confirm and add to shocking statistics about suicidality among the region's youth. PRS surveyed more than 14,000 students at 45 county high schools in 2017. One in six teens reported that they had seriously considered suicide. Nearly 12 percent had actually attempted suicide.

The data from the full Youth Risk Behavior Survey can be found here. The numbers in the image below are for students overall, but the prevalence of depression and suicidal thoughts increase significantly for "sexual minority" students, those who identified as lesbian, gay or bisexual. (The number of transgender students was too small for accurate analysis.) 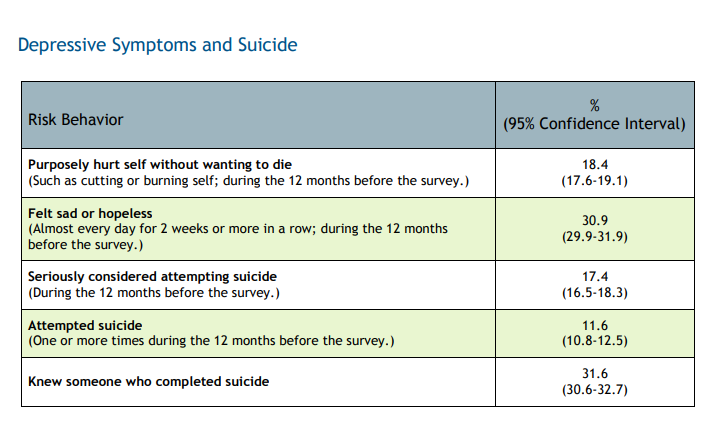 These are numbers for students countywide. In 2015, a Center for Disease Control (CDC) report found that 20 percent of high school students enrolled at in the Cleveland Metropolitan School District had tried to kill themselves. That was was the highest rate of attempted suicide among the 19 urban school districts the CDC surveyed.

"Young people feeling like they matter in their communities, that they can impact what happens in their school, and who talk with their parents about school, are also protective factors," wrote the Center for Community Solutions in its summary of the report.