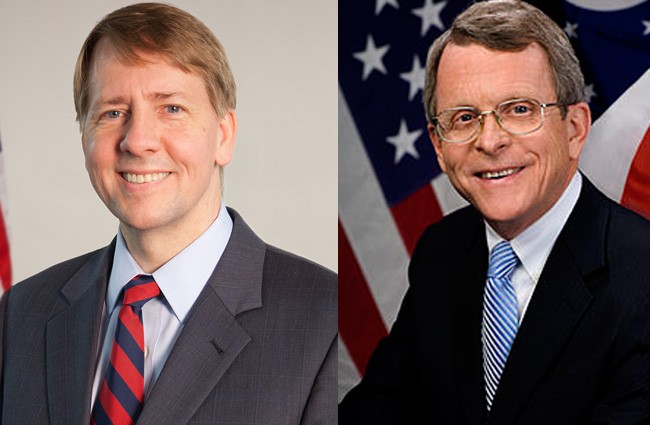 Midterm elections are a little over two months away and all eyes are on Ohio's gubernatorial race. Getting to know the candidates via lighthearted surveys are part and parcel of the campaign trail, and this week the Columbus Dispatch released a Q&A with both candidates, in keeping with their tradition dating back to 1998.

Both candidates believe LeBron James is the greatest basketball player of all time, neither have attended a NASCAR race, both agree James Buchanan is the worst president of all time, both love the food of the Ohio State Fair, and both still collect vinyl records, if you were curious.

When it comes to texting, DeWine admits to using smiley emojis while Cordray has been known to throw in an "LOL," much to the chagrin of his children.

DeWine revealed he was a massive Sam Cooke fan, noting that "A Change is Gonna Come" is his favorite song, while Cordray favors “Racing in the Streets” by Bruce Springsteen.

Some of the questions revealed more about each candidate's personality less by what they said and more on how they said it. They were each asked what their wives nagged them about most. DeWine gave a charming beauty pageant answer, saying, "My wife doesn’t nag me, but she does 'strongly suggest' I not eat a second or third piece of her pie in one sitting." Cordray rejected the question entirely: "I have enough respect for my wife and women everywhere not to call her a nag."

Surprising absolutely no one, both of our white, male, Midwestern candidates didn't have an answer for a favorite rap artist. Cordray said he didn't have one, while DeWine said that his kids and grandkids like Hamilton. Welp.

Next up was a query on their favorite beer/wine/alcohol, to which DeWine said "root beer" and Cordray said "grapefruit juice."

In what may be the most revealing question on the self-awareness of each candidate, DeWine predicted Michael J. Fox would be the one to play him in a movie about his life, while Cordray leaned fully into his dorky reputation and said Jack McBrayer, more commonly known as "Kenneth the Page" on 30 Rock, would play him.

One of those casting decisions is spot on; the other is wishful thinking.