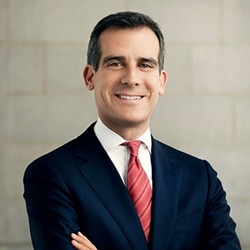 In a speech that seemed like it might easily culminate in the announcement of his presidential candidacy, Eric Garcetti, the Mayor of Los Angeles, diagnosed American political ills and celebrated the resolve of American cities at the City Club of Cleveland Friday afternoon.

Garcetti, who in Los Angeles has enacted legislation to raise the minimum wage, created a $120 billion infrastructure spending plan, kick-started the largest homelessness and affordable housing initiatives in the country and created a coalition of American Mayors to battle climate change, reminded the City Club audience what a driven and energetic city administrator looks like.

When the audience rose in a standing ovation at the conclusion of Garcetti's remarks, the applause seemed to gasp: We want one of those!

Among the more striking differences between Garcetti and Cleveland Mayor Frank Jackson? Garcetti actually appears to enjoy politics, which he gracefully described as a learned craft that includes listening to constituents and building coalitions. Among other things, he said he goes door-knocking when he's not campaigning because it's just so gratifying to hear what residents have to say.

Cleveland didn't come up when Garcetti cited the creative work of mayors across the country, evidence, he said, that leaders in Washington should be following the lead of American communities, not the other way around.

"We must flip Washington on its head," he said, citing the preamble to the U.S. Declaration of Independence, (specifically the line which holds that it is the right of the people to "alter or abolish" any form of government which becomes destructive to people's inalienable rights; i.e. life, liberty and the pursuit of happiness). "Washington should be the enabler of America's greatness, not the restorer of it."

Garcetti lifted up the radical transparency of South Bend, Indiana; the housing policies of Washington, D.C.; the dramatic homicide reductions in Topeka, Kansas; the pension negotiations in Cincinnati; and the leadership on opioids in Dayton, leadership which has made Dayton the fastest growing economy in Ohio. (Dayton Mayor Nan Whaley was in attendance.)

Though Garcetti dodged questions about his own presidential plans — "I don't know what I'm going to do" — he did say his Jewish and Mexican ancestry were unlikely to be barriers. And he assured one questioner that his international experience was just as formidable as his domestic work. Not only did he serve as an intelligence officer in the Navy reserves for 12 years, he worked overseas in both Burma and Ethiopia. Resume safely padded, he nevertheless mentioned off the cuff that he'd lived in Thailand. This guy!

The speech was just a real master class in political oratory. He forcefully rejected the divisions that he said have been exploited by political and corporate interests, and cited select personal information — his Jewish grandmother's immigration; his foster children — that humanized his politics. He presented as a warm and bright politician eager and privileged to serve.

And he concluded on a hopeful note, citing remarks by John McCain and attributing to the American populace the dignity and hope that he said we sorely need more of.

"When has ambition ever failed this nation?" He asked, inciting the awestruck Cleveland audience to dream. "Our reach must exceed our grasp."

Local ambitions did arise briefly in the Q&A. One questioner mentioned the recent economic development discussions underway locally and asked what Garcetti might do to improve Cleveland's performance.

Speaking in general terms, Garcetti said that it couldn't hurt to get a handle on what the local goals are and what the narrative ought to be.

"People don't think of politics as talking about a narrative, but it's what moves people," he said. "Cleveland needs to say who it wants to be and then get everyone involved to say that together."

He advised that while embracing core industries was an obvious key, Cleveland must also not shy away from embracing, and working to overcome, its challenges.