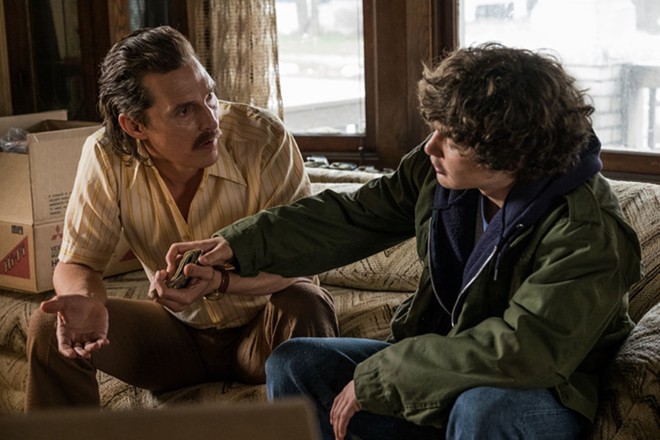 The story of Richard “White Boy Rick” Wershe Jr., the youngest-ever FBI informant, seems like the perfect subject matter for a Hollywood movie. It's a tragic story of how a poor Midwestern kid went from rags to riches and back to rags again.

Rick, who lives in Detroit in the 1980s, turns from informant to druglord and uses his street smart to elude the law (at least for a little while). Credit French director Yann Demange with not sanitizing the subject matter with White Boy Rick, a compelling drama that opens areawide on Friday.

Set in Detroit but primarily filmed in non-descript Cleveland neighborhoods (good luck spotting any landmarks other than Kings Inn in Strongsville), the movie possesses a distinctive grittiness.

The film opens with a scene in which Rick (Richie Merritt) and his father (Matthew McConaughey) buy a few AK-47s off a gun dealer and then modify them with silencers. In justifying his illegal activities, Rick’s father tells Rick that he has to learn to “upsell” people if he wants to get anywhere in life. Why sell someone a hamburger (an AK-47) when you can sell them a burger (an AK-47) with fries (the silencer)?

Rick takes his dad’s advice and hawks the guns to local drug dealer Johnny "Lil Man" Curry (Jonathan Majors), who takes a liking to him and christens him White Boy Rick. Once Rick starts selling drugs, the Feds realize they can make him into an informant, pressuring him by saying if he doesn’t cooperate, they’ll send his father to jail for dealing illegal arms. Rick consents, and things go smoothly. He even takes a trip to Vegas with Johnny and his crew.

But a massive bust eventually sends Johnny to the slammer. The Feds no longer need Rick, and Rick contemplates going back to school. But the Feds tell Rick and his father that it’s not safe for Rick to go to school, where he might become a target because of his informant past.

Feeling they have no other choice and sensing a power vacuum, Rick and his father turn to selling drugs. Their quality of life instantly goes up, and Rick even convinces his estranged sister Dawn (Bel Powley) to move back home. Of course, it’s only a matter of time before everything goes to hell once again.

The film’s first half flies by as Rick gets in deeper with both the Feds and the drug dealers and quickly becomes adept at handling tense situations.

But the movie’s second half is a bit of a slog as it adopts a different, more serious tone.

Still, Merritt is terrific as the street-wise teenager, and McConaughey turns in a fantastic performance as his hustler father. Stick around for the closing credits to hear the real-life White Boy Rick talk about the tragic nature of his life story.