The owners of Barrio, the extremely popular Northeast Ohio chain of build-your-own taco restaurants, are taking a former business partner to court for gimmick infringement.  Barrio's "Day of the Dead" (or Día de Muertos for those that actually practice the sacred holiday and don't appropriate it as a quirky design choice) aesthetic and the use-a-checklist-to-design-a-taco ordering style are also on display at the Condado Tacos chain.

The lawsuit, filed in U.S. District Court in Cleveland last week and first reported by Cleveland.com, alleges that Joe Kahn and others behind Condado Tacos stole "trade secrets" and violated an agreement Kahn entered into when he left a business partnership with Tommy Leneghan and Sean Fairbairn, the team that created Barrio.

Before exiting, Kahn agreed not to do business under the name Barrio, to not use "any logo, trademark or service mark associated" with Barrio, which included the phrase "in the heart of..." Kahn also agreed not to open a Mexican restaurant within a two-mile radius of Barrio's locations for two years.

To be fair, Kahn technically didn't do any of those things. He merely opened his own chain of use-a-checklist-to-make-your-own-taco restaurants decked out in white-dudes appropriating Day of the Dead "sugar skull" style interior design that delivers food in tin foil and plastic baskets in Columbus, Pittsburgh, Cincinnati and Indianapolis.

For comparison, here's a photo of Condado Tacos that Barrio provided as part of its lawsuit. 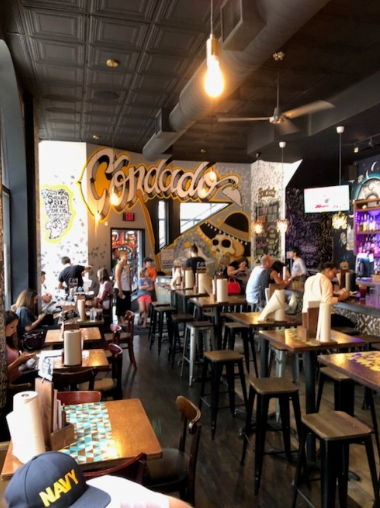 Barrio hasn't seemed to have any issue with Condado Tacos' expanding popularity, until now. Kahn recently announced his plan to open a Condado Tacos in Northeast Ohio as part of the oh-so-small-business-friendly Pinecrest Development in Orange Village, meaning Condado is officially creeping in on Barrio's northeast Ohio turf.

The similarities between the two places are undeniable, but whether or not Barrio has a winning case due to Kahn's agreement (which expired in 2016) not to open a restaurant within two miles of Barrio will be up to the courts.

Then again, by definition, "Barrio" means "a district of a town in Spain and Spanish-speaking countries" and "Condado" translates to just "county."

So clearly, they're totally different places.