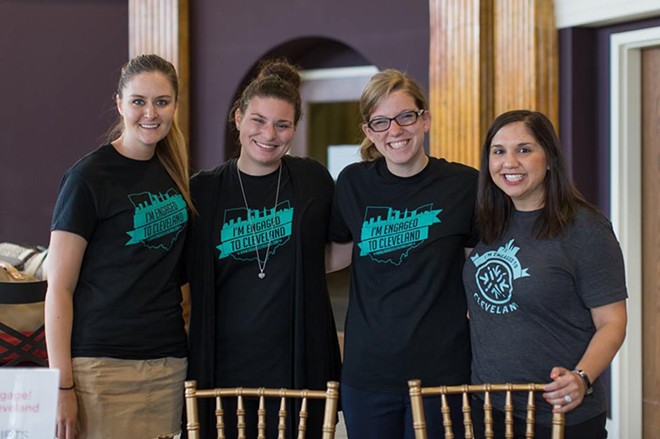 The nonprofit Engage! Cleveland conducted the survey via email over a three-week span in June. Consultants at ERC compiled and analyzed the quantitative and qualitative data. The report summarizing findings was transparent about the survey's demographics and methodology.

While the survey was not at all representative of the population at large — 90 percent of respondents held a Bachelors degree or better; 60 percent made more than $50,000 per year — the results nevertheless echoed broad-based concerns about the region’s leaders.

Last month, at the City Club, participants in a live poll (the majority of whom were under 44 and about a quarter of whom were black) were asked to name the region’s top challenges. Eight of the 11 top responses had to do with stagnant or disengaged leadership.

According to the respondents in the Engage! Cleveland survey, leadership woes afflict both the public and private sectors. In fact, not a single respondent selected “Government” as one of the region’s top-three assets from a list of about 15.

“I honestly feel like the only thing holding YPs back is local government and their own interests in simply being re-elected and in power,” one respondent said. “We need a leadership change immediately.”

But Cleveland’s private web of civic leaders was repeatedly mentioned as an insular group that’s biased against younger people and new ideas.

“This a do-your-time city,” said one respondent. “Many older professionals are myopic and reluctant to relinquish any power. They will relegate you to a junior board, with little to no input.”

Respondents were given the chance to identify priority areas that would specifically help attract and retain young professionals. Employment opportunities, economic development and public transportation were the top three.