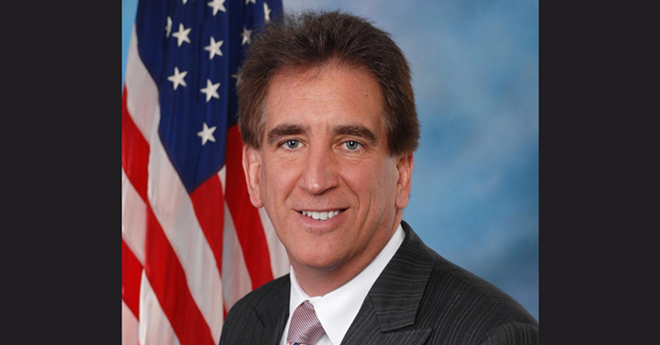 Jim Renacci, the Ohio Republican Senate nominee on the ballot against Sherrod Brown in the November mid-term election, has been flown to more than a dozen campaign events this year in a private plane owned by Don Ksiezyk. That name probably doesn't ring a bell to many, but as the Columbus Dispatch reported this morning, Ksiezyk was the owner of a pair of Northeast Ohio strip clubs — Bug-A-Boos, also known as Johnny’s Tramell’s, and Peek-A-Boos, also known as Elias Brothers Showbar-Lounge in Cleveland.

Renacci skipped two roll-call votes on Tuesday to campaign in Ohio, the Dispatch noted, and has reportedly paid a total of about $2,500 between January and June for the trips according to campaign-finance reports filed with the Federal Election Commission.

Ksiezyk is a licensed pilot, and appears to have flown Renacci in a plane registered to his also now defunct company, American Nightlife Magazine. Renacci, of course, is a "family values" Republican.

There's nothing wrong with associating with a strip club owner or sex workers in general, but according to On The Issues, a website dedicated to documenting candidates' publicly declared stances, Renacci has consistently voted as a evangelical and a man of faith.

Renacci has consistently voted against women's bodily autonomy as well as in favor of defunding Planned Parenthood.

The Dispatch also posed questions regarding the possible business relationship between Renacci and Ksiezyk, particularly during his short-lived bid for governor before he hopped into the Senate race.

Renacci was asked outside the House chamber on Wednesday about his decision to travel by plane, whether he had any sort of business relationship with Ksiezyk and whether Ksiezyk flew him during his gubernatorial bid. He declined to answer, instead repeatedly saying, “You already have my comment on that.”