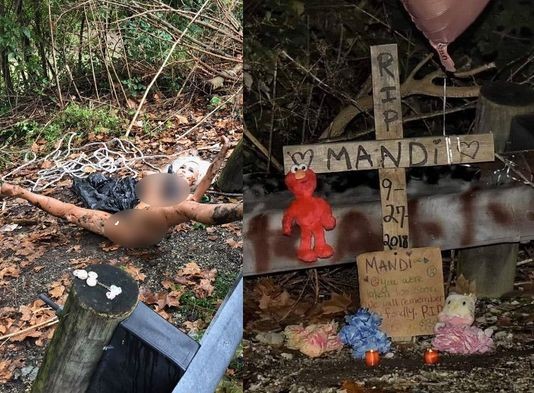 Tragedy struck in Hamilton County last week when the body of a woman, now identified as "Mandi," was found in a nature preserve. The county coroner arrived to assess the grizzly scene and concluded the cause of death for this haphazardly discarded, fully nude woman was that she was actually a sex doll, not a human.

Now that photos of the crime scene have surfaced, the "recreational mannequin," as police called her, has made her way into the hearts of the community. A memorial has been set up in her honor near the location where she was found.

Flowers, candles, a heart shaped balloon and an Elmo plushie have popped up on the side of Lick Road near the Richardson Forest Preserve, reminding all passersby of the sex doll who was wronged. A sign at the foot of a cross serving as a makeshift grave marker reads "Mandi, you were taken too soon. We will remember you fondly. RIP."

Photos of the memorial were first sent to the City of Cincy Facebook parody page, but the comments are now mostly people tagging friends to pay respects to their "girlfriend."

Now that photos of Mandi are available, it does confirm the initial suspicion that the discarded doll was a high-end model, and likely cost thousands of dollars before being kicked to the curb.